There was neither death nor immortality then.
There was no distinguishing sign of night nor of day.
That One breathed, windless, by its own impulse.
Other than that there was nothing beyond.

Darkness was hidden by darkness in the beginning,
with no distinguishing sign, all this was water.
The life force that was covered with emptiness,
that One arose through the power of heat. 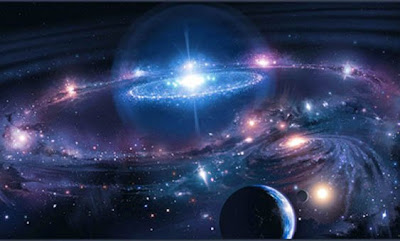 Desire came upon that One in the beginning,
that was the first seed of mind.
Poets seeking in their heart with wisdom
found the bond of existence and non-existence.

Their cord was extended across.
Was there below?
Was there above?
There were seed-placers, there were powers.
There was impulse beneath, there was giving forth above.

Who really knows?
Who will here proclaim it?
Whence was it produced?
Whence is this creation?
The gods came afterwards, with the creation of this universe.
Who then knows whence it has arisen?

Whence this creation has arisen
- perhaps it formed itself, or perhaps it did not -
the One who looks down on it,
in the highest heaven, only He knows
or perhaps even He does not know.

It is only in the Vedas that you see the seers penetrating the barrier of Being & peep into non-being and God without his creation & keeping the theory honest with a negative assertion "Who then knows whence it has arisen?"

Tina ૐ Sadhwani You're right Gurushankar... Vedas are the only system of knowledge that take a mature and objective stand on the nature of existence, reality and creation...they don't impose any dogmatic beliefs on you.. they present you with honest scientific observations ... and even though the Vedas predates modern science by thousands of years the sublime metaphysics of the Vedas is the most magnificent, most rational and most scientific treatise on physics and cosmology that I have ever come across...