Dakshinamurthy or Jnana Dakshinamurti (Sanskrit: दक्षिणामूर्ति ((Dakṣiṇāmūrti))
[1] is an aspect of Shiva as a guru (teacher) of all type of knowledge, particularly the jnana. This aspect of Shiva is his personification as the supreme or the ultimate awareness, understanding and knowledge.
[2] This form represents Shiva in his aspect as a teacher of yoga, music, and wisdom, and giving exposition on the shastras.
[3] He is worshipped as the god of wisdom, complete and rewarding meditation. 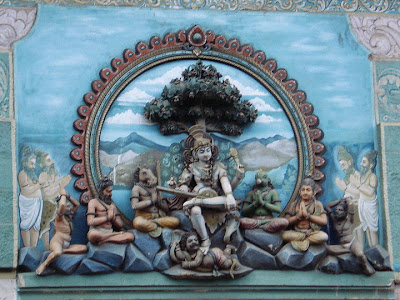 [4]Dakshinamurti literally means 'one who is facing south (dakṣiṇa)' in Sanskrit. South is the direction of Death, hence change.
[5] In every Siva temple the stone image of Dakshinamurthy is installed, facing south, on the southern circumambulatory path around the sanctum sanctorum. Perhaps, of all Hindu Gods, he is the only one sitting facing south. The great seer Ramana Maharshi, has interpreted the name as "Dakshina-amurty", meaning one who is capable but without form.In his aspect as Jnana Dakshinamurti, Shiva is generally shown with four arms. He is depicted seated under a banyan tree, facing the south. Shiva is seated upon a deer-throne and surrounded by sages who are receiving his instruction.
[7] He is shown as seated with his right foot on mythical apasmara (a demon which, according to Hindu mythology, is the personification of ignorance) and his left foot lies folded on his lap.
Sometimes even the wild animals, are depicted to surround Shiva. In his upper arms, he holds a snake or rosary or both in one hand and a flame in the other; while in his lower right hand is shown in vyakhyanamudra, his lower left hand holds a bundle of kusha grass or the scriptures.
The index finger of His right hand is bent and touching the tip of his thumb. The other three fingers are stretched apart. This symbolic hand gesture or Mudra is the Gnana Mudra (or Jnana Mudra or Jana Mudra), a symbol of knowledge and wisdom. Sometimes, this hand is in the Abhaya Mudra, a posture of assurance and blessing.Dakshinamurthy is portrayed as being in the yogic state of abstract meditation - and as a powerful form brimming with ever flowing bliss and supreme joy.
Variations of this iconic representation include Veenadhara Dakshinamurthy (holding a Veena), Rishabharooda Dakshinamurthy (mounted on a Rishabha - the bull) etc.Indian tradition accords a special reverence to the Guru or the teacher. Dakshinamurthy, in the Saivite system of beliefs is regarded as the ultimate Guru - the embodiment of knowledge and the destroyer of ignorance (as represented by the demon being crushed under the feet of the deity).
The Jnana Mudra is interpreted in this way:-
The thumb denotes the God and the index finger denotes the man. The other three fingers stand for the three congenital impurities of man viz. arrogance, illusion and bad deeds of the past births. When man detaches himself from these impurities, he reaches God.
The Abhaya Mudra, a gesture with the hand lifted above thigh with palm facing out, fingers pointing, is interpreted as His grace upon His students. The rosary or the snake signifies Tantric knowledge. The fire represents illumination, removing the darkness of ignorance.The fifth day of the week, Thursday is associated with the planet Jupiter and is referred to as Guruvar (or Guruvaaram). Thursdays are considered auspicious to start any educational endeavours.
It is on Thursdays that special worship services are offered to Dakshinamurthy in many Saivite temples. Some temple traditions hold full moon nights, particularly the night of the Guru Poornima as the appropriate time for worship services to Dakshinamurthy.Even though the idol of Dakshinamurthy is installed in every Shiva temple, there are only a few temples where Dakshinamurthy is the chief deity. Only one of the twelve Jyotirlingas is Dakshinmurthy,
The Mahakaleshwar in Ujjain. Being the only Dakshinmurthy Jyotirlinga, It holds special importance for Shaivites as a site of learning. Other notable temples are the Vaikom Mahadevar temple in Kerala, where the deity enshrined in the form of a Shivalingam is considered as Dakshinamurthy, and Alangudi (Kumbakonam) in Tamil Nadu.

In the Sivanandeswarar temple in Thirupanthurai, (Tanjore) Tamil Nadu, He is depicted in the Ardhanari form. In Thirupulivanam, we can find Dakshinamurthy in the form of Ardhanariswara.

This temple is on the Uthiramerur-Kanchipuram road, 5 km from Uthiramerur, near Chennai. [1]

In March 2007, a big temple of Lord Dakshinamurty (the first in Maharashtra) was created in the Shrutisagar Ashram, about 30 km from Pune.Dakshinamurthy Ashtakam by Adi Shankaracharya is a laudatory hymn for this form of Siva.