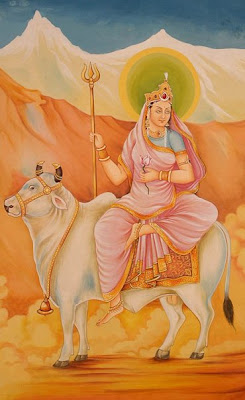 She is a daughter of Himalaya and first among nine Durgas. In previous birth she was the daughter of Daksha. Her name was Sati - Bhavani. i.e. the wife of Lord Shiva. Once Daksha had organized a big Yagna and did not invite Shiva. But Sati being obstinate, reached there. Thereupon Daksha insulted Shiva. Sati could not tolerate the insult of husband and burnt herself in the fire of Yagna.
In other birth she became the daughter of Himalaya in the name of Parvati - Hemvati and got married with Shiva. As per Upnishad she had torn and the egotism of Indra, etc. Devtas. Being ashamed they bowed and prayed that, "In fact, thou are Shakti, we all - Brahma, Vishnu and Shiv are capable by getting Shakti from you."
Nava – that also means 'new' – denotes 'nine' the number to which sages attach special significance.
Hence, we have Nava-ratri (9 nights),
Nava-patrika (9 leaves / herbs / plants),
Nava-graha (9 planets),
and Nava-Durga (9 appellations).
Here is a slide show of the 9 manifestations of Goddess Durga. Each goddess has a different form and a special significance. Nava Durga, if worshipped with religious fervor during Navaratri, it is believed, lift the divine spirit in us and fill us with renewed happiness. All the nine names of goddess are narrated in ‘Devi Kavacha’ of the ‘Chandipatha’ scripture. Learn about the nine goddesses in the following slides that include beautiful watercolor paintings of each appellation.