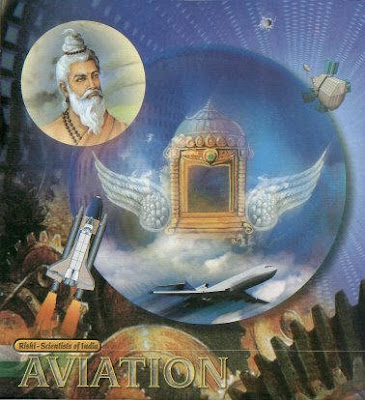 Acharya Bharadwaj had a hermitage in the holy city of Prayag and was an ardent apostle of Ayurveda and mechanical sciences. He authored the "Yantra Sarvasva" which includes astonishing and outstanding discoveries in aviation science, space science and flying machines.
He has described three categories of flying machines:
1.) One that flies on earth from one place to another.
2.) One that travels from one planet to another.
3.) And One that travels from one universe to another. His designs and descriptions have impressed and amazed aviation engineers of today. His brilliance in aviation technology is further reflected through techniques described by him:

Tina ૐ Sadhwani “The ancient Indians could navigate the air, and not only navigate it but fight battles in it like so many war-eagles, combating for the domination of the clouds. To be so perfect in aeronautics they must have known all the arts and sciences relating to the science, including the strata and currents of the atmosphere, the relative temperature, humidity, density and specific gravity of the various gases....." - Col. Olcott in a lecture in Allahabad in 1881.

Tina ૐ Sadhwani ‎""These ancient Indian texts on Vimanas are so numerous, it would take volumes to relate what they had to say. The ancient Indians, who manufactured these ships themselves, wrote entire flight manuals on the control of the various types of Vi...manas, many of which are still in existence, and some have even been translated into English. The Samaraanganasutraadhaara is a scientific treatise dealing with every possible angle of air travel in a Vimana.

There are 230 stanzas dealing with the construction, take-off, cruising for thousand of miles, normal and forced landings, and even possible collisions with birds. The Vaimanika Sastra also includes information on steering, precautions for long flights, protection of the airships from storms and lightning and how to switch the drive to "solar energy" from a free energy source which sounds like "anti-gravity.

Like it or not, the Vedic cosmological treatises are loaded with references to aircraft and devastating weapons. There is no way to ignore the plain fact. Yet, most Indology experts have managed to do just that. How do you overlook or trivialize these innumerable descriptions? It is impossible to escape them unless your mind is already made up to reject them. Discard them you must, because mainstream academia will not consider that humans in remote antiquity could have been advanced – not to mention expert – in a technology far more subtle than the crudities we are proud of today."

Rishabh Singhvi And the west takes the entire credit claiming to discover/ invent somethin already known and recorded by the vedas.