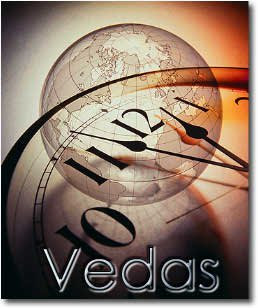 Robert Oppenheimer (PHYSICIST):
"The general notions about human understanding… which are illustrated by discoveries in atomic physics are not in the nature of things wholly unfamiliar, wholly unheard of or new. In Hindu thought they have a more considerable and 'central' place. What we shall find in modern physics is an exemplification, an encouragement, and a refinement of old Hindu wisdom."

Alan Watts (PHILOSOPHER):
"To the philosophers of India, the scientific theory of Relativity is no new discovery. Yet it is, indeed, a remarkable circumstance that when Western civilization discovers Relativity it applies it to the manufacture of atom-bombs, whereas Eastern civilization applies it to the development of new states of consciousness."

Werner Heisenberg (FATHER OF QUANTUM PHYSICS, Nobel Prize winner): "After the conversations about Indian Philosophy, some of the ideas of Quantum Physics that had seemed so crazy suddenly made much more sense."

Erwin Schrödinger (PHYSICIST), awarded the Nobel prize in Quantum Mechanics, in 1933. He said.. "The unity and continuity of "Vedanta" are reflected in the unity and continuity of wave mechanics. In 1925, the world view of physics was a model of a great machine composed of separable interacting material particles. During the next few years, Schrodinger and Heisenberg and their followers created a universe based on super imposed inseparable waves of probability amplitudes. This new view would be entirely consistent with the Vedantic (Veda) concept of All in One."

Brian David Josephson (PHYSICIST, Nobel Laureate): "The Vedanta and the Samkhya hold the key to the laws of the mind and thought process which are correlated to the Quantum Field, i.e the operation and distribution of particles at atomic and molecular levels."

Dick Teresi (RESEARCHER): "Indian cosmologists were the first to estimate the age of the earth at more than 4 billion years. They came closest to modern ideas of atomism, quantum physics, and other current theories. India developed very early, enduring atomist theories of matter. Possibly Greek atomistic thought was influenced by India, via the Persian civilization."

Dr. Carl Sagan (ASTROPHYSICIST):
"The Hindu religion is the only one of the world's great faiths dedicated to the idea that the Cosmos itself undergoes an immense, indeed an infinite, number of deaths and rebirths. It is the only religion in which the time scales correspond, to those of modern scientific cosmology. Its cycles run from our ordinary day and night to a day and night of Brahma, 8.64 billion years long. Longer than the age of the Earth or the Sun and about half the time since the Big Bang. And there are much longer time scales still."

Voltaire (PHILOSOPHER): "The Veda was the most precious gift for which the West had ever been indebted to the East"

Paul Deussen (PHILOSOPHER AND SANSKRIT SCHOLAR):
"Whatever may be the discoveries of the scientific mind, none can dispute the eternal truths propounded by the Upanishads. Though they may appear as riddles, the key to solving them lies in our heart and if one were to approach them with an open mind one could secure the treasure as did the Rishis of ancient times"

Nikola Tesla (SCIENTIST) -contributor to the field of electricity and electromagnetism, influenced by Vedic Science and Philosophy.
http://www.newsfinder.org/site/more/vedic_philosophy_of_nikola_tesla/

The field of "PSYCHOLOGY" is based on the concept of the "Unconscious" provided by Sigmund Freud and the "Collective Unconscious (ATMAN)" provided by Carl Jung. Freud adopted the idea of unconscious from Arthur Schopenhauer and Arthur learnt these concepts from the "Upanishads". Carl Jung's concepts were influenced by Vedanta and Vedic Philosophy.
Ref: http://www.friesian.com/arthur.htm
http://webspace.ship.edu/cgboer/jung.html
http://www.sol.com.au/kor/12_02.htm

General PHILOSOPHY and its concepts of 'mind', 'unity', 'universal consciousness', 'nature of existence', 'ontology', 'metaphysics', 'dualism', 'non-dualism' etc. are sourced from the Vedas and Vedanta.
Read: Wisdom of the Vedas- By J.C Chaterji
T.S Eliot: "Indian Philosophers' subtleties make most of the great European philosophers look like schoolboys."

Suharto Sukarno (FIRST PRESIDENT OF INDONESIA):
"In the veins of every one of my people flows the blood of Indian ancestors and the culture that we possess is steeped through and through with Indian influences. Two thousand years ago people from your country came to Jawadvipa and Suvarnadvipa in the spirit of brotherly love."