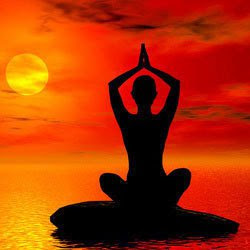 "The greatness of India is spiritual. The world has lost the truth. We have lost the Great Sense, the meaning of our evolution, the meaning of why so much suffering, why dying, why getting born, why this earth, who we are, what is the soul, what is reincarnation, where is the ultimate truth about the world, the universe... But India has kept this truth. India has preserved it through seven millennia of pitfalls, genocides, and mistakes. And this was meant to be India's gift to this planet in this century: to restore to the world its true sense, to recharge humanity with the real meaning and spirit of life. India can become the spiritual leader of the world, if only its own people will allow it.

Today India is in mortal danger, its eternal sanatana dharma is under threat from its own people. And if India dies spiritually, the world will die also. India is the last chance for the world to avoid pralaya- 'self-destruction'."

"India indeed has a preciousness which a materialistic age is in danger of missing. Some day the fragrance of her thought will win the hearts of men. This grim chase after our own tails which marks the present age cannot continue for ever. The future contains a new human urge towards the real beauty and holiness of life. When it comes, India's Sanatana Dharma will be searched by loving eyes and defended by knightly hands."

"Our sublimest delusion is that India is backward. This predicates, of course, that we are progressive. If backwardness and progress depend on the rate at which one can gobble up vanities perhaps India does not need our aid.....India's devotion to being righteous rather than being clever comes nearer the heart of a true civilization. Cleverness dies on the tongue like a social pleasantry, goodness echoes round the universe in an un-extinguishable reality. We in the West are too busy to see that science without soul is like words without meaning."
Posted by Free Thinker at 10:42 AM