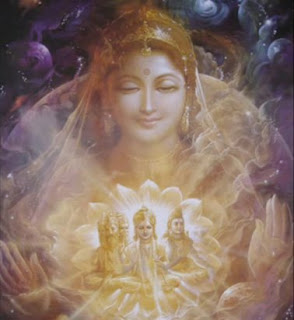 India is the only culture in the world where the words for strength and power are "feminine"
-"Shakti'' means "power'' and "strength.'' All male power is said to come from the feminine.

Hence it is significant to note that only Indians worship God in the form of "Divine Mother". In Hinduism the deities for knowledge, learning and material wealth are female and not male. The past social inconsistencies and injustices in India did not arise from Hindu scriptures, but from humans who failed to correctly incorporate the teachings of the scriptures, such as the Vedas, Upanishads and the Bhagavad Gita, into their social philosophy.

No other scripture in the world has ever venerated women as such like Goddesses.
Posted by Free Thinker at 10:27 AM