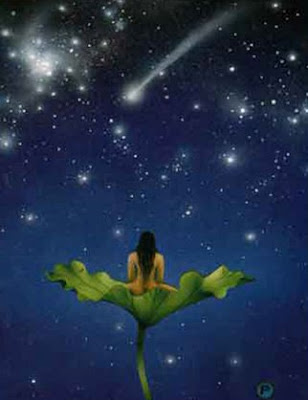 "O King of Gods. I have known the dreadful dissolution of the universe. I have seen all perish, again and again, at the end of every cycle. At that terrible time, every single atom dissolves into the primal pure waters of eternity, whence originally all arose. Everything then goes back into the fathomless, wild infinity of the ocean, which is covered with utter darkness and is empty of every sign of animate being. Ah, who will count the universes that have passed away, or the creations that have risen afresh, again and again, from the formless abyss of the vast waters? Who will number the passing ages of the world, as they follow each other endlessly? And who will search through the wide infinities of space to count the universes side by side, each containing its Brahma, its Vishnu, and its Shiva?"

Tina ૐ Sadhwani The Indian mind has a vision of eternity and infinity. It is aware of the vast cycles of creation and destruction that govern the many universes and innumerable creatures within them.
Posted by Free Thinker at 10:12 AM