Lord Vishnu who represents the unconscious, unmanifest universe is said to rest in the coils of Ananta, the great serpent of Infinity, while he waits for the universe to recreate itself. 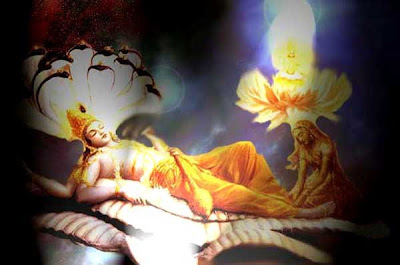 Carl Sagan (SCIENTIST): "The Hindu religion is the only one of the world's great faiths dedicated to the idea that the Cosmos itself undergoes an immense, indeed an infinite, number of deaths and rebirths. It is the only religion in which the time scales correspond, to those of modern scientific cosmology. Its cycles run from our ordinary day and night to a day and night of Brahma, 8.64 billion years long. Longer than the age of the Earth or the Sun and about half the time since the Big Bang. And there are much longer time scales still.