Hemkund in Chamoli- Dasam Granth says this is the place where Pandu Raja practiced Yoga.

Hemkund in Chamoli-  Dasam Granth says this is the place where Pandu Raja practiced Yoga.
Etymology :-

Hemkund is a Sanskrit name derived from Hem ("Snow") and Kund ("bowl"). Dasam Granth says this is the place where Pandu Raja practiced Yoga.

Bachitira Natak is an autobiographical account of incarnated life of Shri Guru Gobind Singh Ji as a powerful youth who was called into existence during Sat Yug, the 'age of truth' (the first of four ages according to Hindu mythology) to do battle with fierce demons that terrorized mortals and gods including hindu dieties and gods.

When they had been destroyed, the youth, known as Dusht Daman, the 'destroyer of evil', was instructed to go to Hemkunt Sapatsring to meditate until he was called upon by God. Guru Gobind Singh's own account in Bachitra Natak completes this story. After realizing his oneness with God through meditation and austere discipline, he was reborn in Kal Yug, the 'age of darkness', as the son of the ninth Guru and his wife. 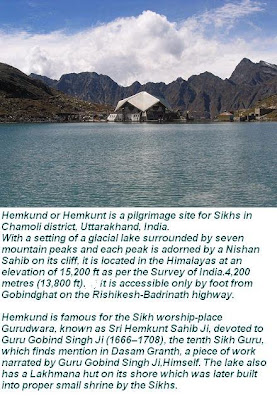 Later, after his father's martyrdom, he became the tenth and final living Guru of the Sikhs

Design and construction of the present gurudwara was started in the mid-1960s, after Major General Harkirat Singh, Engineer-in-Chief, Indian Army visited the gurudwara. Major General Harkirat Singh selected Architect Siali to head the design and construction effort. Thereafter, Architect Siali made annual trips to Hemkunt and organized and supervised the very complex construction process.
Today there is Live Kirtan from Gurudwara Sahib on MH1 Channel which is broadcasted every morning from 10 to 12 AM. Gurudwara Sahib represents abode of Akal Purukh Primal God and one feels heavenly and lucky to visit this godly place.

About 3 km from Gobinddham is the 5 km long Valley of Flowers. The Indian Government has declared this valley a national park. It is situated in Nanda Devi Bio Reserve, and all activities are carefully regulated to preserve the valley in pristine condition. The best months to visit are July and August, during the monsoons. The valley can be closed to visitors if the weather is totally inclement.
Legend has it that a flower called Brahma-Kamal blossoms here every 12 years.
Posted by Free Thinker at 11:58 AM