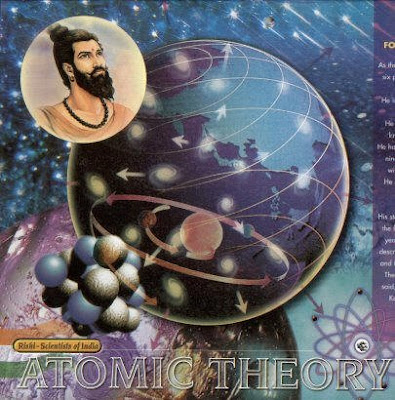 As the founder of "Vaisheshik Darshan"- one of six principal philosophies of India - Acharya Kanad was a genius in philosophy.

He is believed to have been born in Prabhas Kshetra near Dwaraka in Gujarat . He was the pioneer expounder of realism, law of causation and the atomic theory.

He has classified all the objects of creation into nine elements, namely: earth, water, light, wind, ether, time, space, mind and soul. He says, "Every object of creation is made of atoms which in turn connect with each other to form molecules."

His statement ushered in the Atomic Theory for the first time ever in the world, nearly 2500 years before John Dalton.

Kanad has also described the dimension and motion of atoms and their chemical reactions with each other. The eminent historian, T.N. Colebrook, has said, "Compared to the scientists of Europe, Kanad and other Indian scientists were the global masters of this field."
Posted by Free Thinker at 10:16 AM