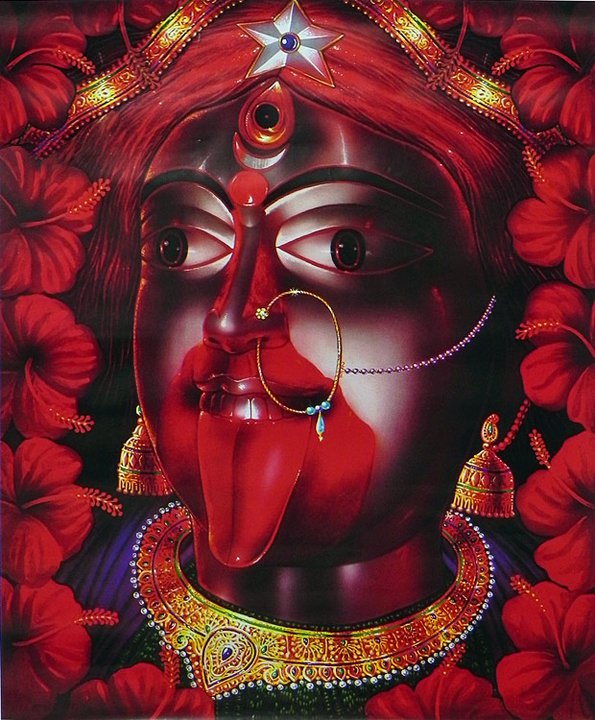 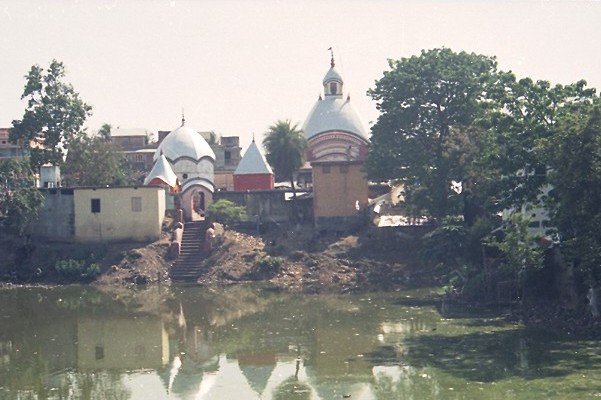 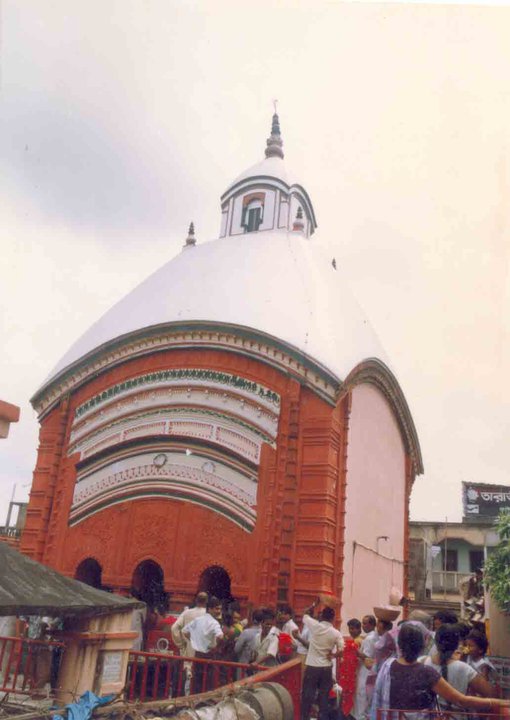 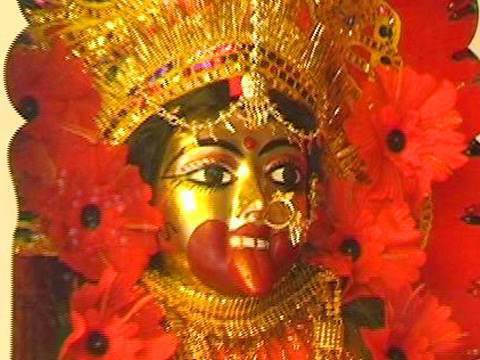 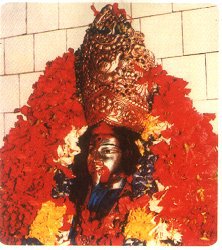 Some 300 miles from Calcutta, Tarapith is situated on the banks of the north flowing Dwarka river, in Birbhum, in West Bengal. The temple that was built by Vasistha got buried under the earth with the passage of time. Tarapith as it stands today, was built by Joybroto, a merchant, who received directions from Tara Maa in his sleep to unearth the 'brahmashila', or the sacred stone, to set it up as a shrine in a proper place. Tara Maa of Tarapith, another form of Kali, has two hands, is garlanded with snakes, is adorned in sacred threads, and has Shiva lying in her left lap sucking her breast.Tarapith is regarded as one of the 52 Shakti Peethams of India. According to Hindu belief, an insulted Sati, the wife of Lord Shiva, sacrificed herself at an yagna which was being performed by her father Dakshmaharaj. Angry with this incident Lord Shiva started the tandava nritya (a dance of destruction). This incident forced Lord Vishnu to use his Sudershan chakra to cut the body of Sati into several places. Sati's body was thus scattered all over what is presently the Indian subcontinent. There are 51 such holy spots where temples have been erected and they are called Pithas or the Shakti Pithas. Some of the Pithas are in West Bengal. The most popular of them are Kalighat (in Calcutta), Tarapith etc.

Tarapith is a mahapith from where Sadhak Bama Khapa acquired "Siddhi Laav". This is one of the most sacred place where every year several millions of devotees come to offer Puja. Tarapith or Tarapeeth or Tarapeath is regarded as Mahapeeth and extremely holy place for all Hindus.

It is said that offering Puja at this Mahapitham with a holy heart and full belief on Maa Tara (an another form of Maha Kali) fulfills all your earnest desires. Ma Tara is one of the form of super power and the symbol of kindness. She is the consort of Lord Shiva. It is said (this is the common belief of millions of devouts ) that even if someone gets the slightest part of kindness and blessings of Ma Taara then his / her life is changed... ... her kindness and blessings gives the sight in the eyes of a blind, rescue the man from the sure death trap, Survives a victim from any accident or dreaded disease, a sad person who wants to commit suicide after getting hurted from his near and dear one gets back the meaning of life... and eternal peace, a man who passes sleepless nights for acute mental pressure and anguish of any kind for the reason of anything gets the peace & relief, Closed door becomes open on the face of a man and he gets survived from the debt or other his financial losses ... even the impossible thing becomes possible astonishingly ... ... ...

IT IS SAID THAT WHEREVER YOU ARE IN THIS GLOBE AND WHATEVER BE YOUR RELIGION, THE KINDNESS AND BLESSINGS OF MA TARA WILL REACH YOU TO FULFILL YOUR DESIRE ... ... TO GIVE YOU A RELIEF FROM PAIN IF ANY IN YOUR HEART & MIND ...JUST PRAY TO HER WITH A FULL HEART BELIEF AND IF POSSIBLE OFFER PUJA ... ... ...
Posted by Free Thinker at 10:14 PM