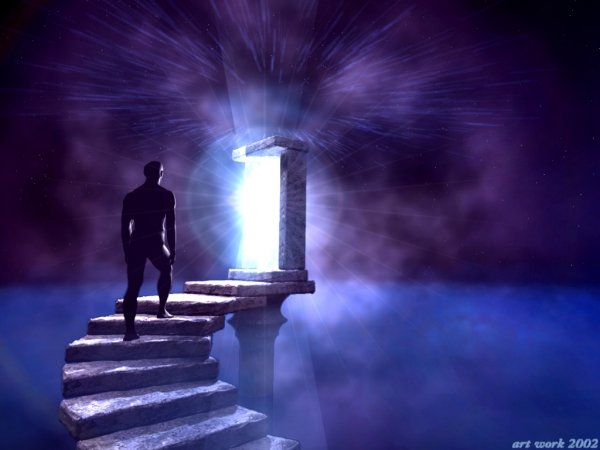 In the Rig Veda there are 5 hymns constituting an important dialogue between Lord Indra and Sage Agastya that reflects the significance of traversing the evolutionary path of consciousness, that seems to serve as a crucial pre-requisite to understanding the true nature of the Supreme Absolute Reality (God).

The verses exemplify how sage Agastya, by the sheer force of his thoughts is breaking through the barriers of his mind, reaching the realm of God without first being developed as a fully functional being in all his levels of consciousness. The eagerness to experience God gets the better of sage Agastya and his senses and he refuses to progressively surrender to the stepping stone (which in this case refers to Lord Indra) in his quest for God. At this point, sage Agastya gets pushed back by Indra who does not allow him to proceed to the realm of God.

Indra goes on to explain that it is the progressive transcendence (of ego-consciousness) through divine activities that will take a mortal towards the immortal truth. Sage Agastya thenceforth realizes his folly, surrenders his will to Indra and goes on to execute his mandated activities through Indra.

One of the obvious implications that can be drawn from the verses is that the sense of "I" that we adorn and the identification with our ego-consciousness is often what prevents us from experiencing the Divine. That would also probably explain why meditation, yoga, etc. are delineated as paths in Hinduism to achieve that distance and 'dis-identification' from the ego-centric self. One could however, question the whole point or significance of transcending the ego-bound self, to which it can be reasoned that detachment (the kind that Lord Krishna expounds in the Gita) would actually entail a greater sense of involvement and participation in life’s experiences without being shaken or affected by them. It would imply a sense of free-experiencing that is unimpeded by our conditioned beliefs, emotions, memories, reactions, etc. enabling us to understand things from a larger frame of reference.

Modern psychology and cognitive science is only now exploring the frontiers of consciousness (exemplified in Vedanta) and its impact on human life and behaviour. Current researches (Joel Krueger) in the field also indicate that transcending of the personalized ego often leads to a unified mode of awareness and "That a scholar acquires a new insight, or a moralist a new motive, or an artist a new imagination, or a religious figure a new awakening, are all based upon a disclosure of this kind of unity in consciousness" which is only made possible by that ego transcendence.

Sri Aurobindo (scholar of the Vedas) was one of the first pioneers in the field of consciousness studies. His work was further compounded by researcher Ken Wilber who (based on Aurobindo's Vedic insights and Piaget's Cognitive Development) established the 'ten levels of consciousness' that humans had to develop through, re-affirming the fact that psychological and spiritual development go hand in hand; that we can't have one without the other.

The ten levels of consciousness derived from this template are:

1) The Sensoriphysical- reflecting the realm of matter, sensation and perception.

4) Rule/role mind- thinking in terms of concrete things and events.

5) Formal-reflexive mind- the level of reflective, abstract thinking and introspection.

6) Vision-logic- the level of synthesis and integration.

Our centre of gravity is said to rest in a certain level on that spectrum and our thoughts and actions are defined by that level of functioning. Evolution of consciousness then requires a shift to higher levels. Wilber believes that the majority of humankind is still operating on the Mental, or Egoic, level, while only a few have attained higher spiritual consciousness. Consequently it's important to note that if an individual has spiritual experiences but his consciousness has only developed to the level of the 'rep' mind (level 3) for instance then he won't be able to understand that spiritual experience in a broad way and won't be able to integrate it. On the contrary he is more likely to distort the experience for people tend to interpret their religious/spiritual experience according to the level of mental development they are at. This does not imply that there are different levels of God, but that there are different levels of interpretation. The person at the highest levels of consciousness will have a more integrated and holistic understanding of the Supreme Reality.

It's also interesting to note that those who are at the 'earlier stages of development' often tend to think that "their truth is the only truth that is actually correct" as they lack the cognitive ability to integrate alternate perspectives. To explain the tangible effects of this phenomenon, Swami Vivekananda once said "Whenever a prophet got into the super-conscious state by heightening his emotional nature, he brought away from it not only some truths, but some fanaticism also, some superstition which injured the world as much as the greatness of the teaching helped."

Eminent author Ram Swarup also explains that even though a person has spiritual experiences, if he has not transcended his ego then his connection with the Divine will be distorted and filtered through his immature mind and his resulting beliefs and actions will prove to be very destructive, as can be witnessed from the history of imperial movements and regimes. He claims that this happens "because they mix spiritual truth and ego together, which is a very dangerous and volatile combination... as nectar mixed with poison becomes poison".

It stands to reason then that without the anchor of integrated development a person can be in danger of falling prey to the lower nature of his self which perpetuates various forms of dysfunctions from a simple lack of objectivity to extreme fanaticism.

Researcher Prem Sabhlok also asserts "The ancient, medieval and modern history of India as well as of the world has confirmed that with material knowledge based on sense experiences and intellectual reasons and arguments alone, any search for God had always led to fanaticism, fundamentalism, communal tension, destruction of the temples, gurudwaras, churches, etc. of the same God and even has been cause of wars between the nations. With material knowledge, the same God appears different to various sections of the people."

This suggests that it is often imperative for a super-conscious spiritual experience to be supported by a corresponding heightened psychological development. More importantly, it indicates that material knowledge without spiritual growth can be counterproductive as there is something crucial missing in human awareness that causes us to fall victim to all sorts of delusions and distortions. Vedas refers to this as 'avidya'-ignorance and goes on to explain how we need to reach a certain stage in consciousness for this avidya to dissolve.

Evolution of Consciousness and Enlightenment

As we progress to higher levels of development on that scale, our consciousnesses expands. So the more narrow, fragmented and restricted our mode of consciousness- the more prone we will be to experiencing psychological disorders or distortions. And the more expanded and heightened our level of consciousness, the more scope we will have for self-actualization and enlightenment.

Therefore enlightenment in this context implies an expansion of consciousness from the isolated, alienated individual to a kind of global cosmic consciousness. A progressive expansion from parts of the psyche (persona) to the psyche (ego) to the environment (ecological) to the universe (Brahman).

While it is often reiterated that there is only one ineffable, all-pervading and immanent reality (Brahman), Vedic metaphysics makes it clear that it is only at the stage of "Turiya" (highest level of superconsciousness) that a person experientially discerns and understands this One Supreme Reality (God) in all its magnitude and the vehement effect of Maya -the cosmic illusion then dissolves.

So contrary to Darwin's theory of evolution and according to Vedic scriptures, one form of species does not evolve into another, rather it is the soul that evolves through the various levels of consciousness and this transition is not so much biological as much as it is spiritual.

Aurobindo declares, “Man is a transitional being. He is not final. The step from man to superman is the next approaching achievement in the earth's evolution. It is inevitable because it is at once the intention of the inner spirit and the logic of Nature's process.”

1. Indra: It is not now, nor is It tomorrow; who knoweth that which is Supreme and Wonderful? It has motion and action in the consciousness of another, but when It is approached by the thought, It vanishes.

2. Agastya: Why dost thou seek to smite us, O Indra? The Maruts are thy brothers. By them accomplish perfection; slay us not in our struggle.

3. Indra: Why, O my brother Agastya, art thou my friend, yet settest thy thought beyond me? For well do I know how to us thou willest not to give thy mind.

4. Indra: Let them make ready the altar, let them set Agni in blaze in front. It is there, the awakening of the consciousness to Immortality. Let us two extend for thee thy effective sacrifice.

5. Agastya: O Lord of substance over all substances of being, thou art the master in force! O Lord of Love over the powers of love, thou art the strongest to hold in status! Do thou, O lndra, agree with the Maruts, then enjoy the offerings in the ordered method of the Truth.

-Joel Krueger (2007) The Varieties of Pure Experience: William James and Kitaro Nishida on Consciousness and Embodiment