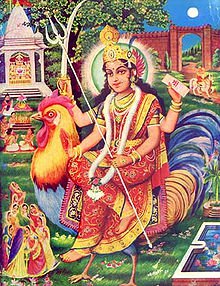 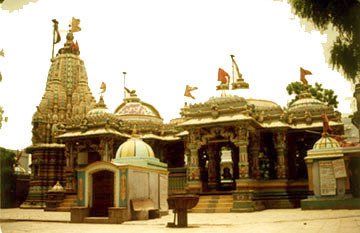 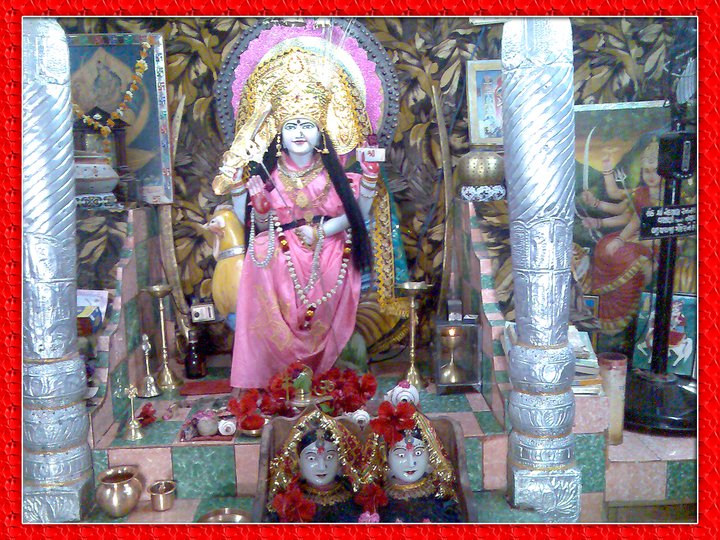 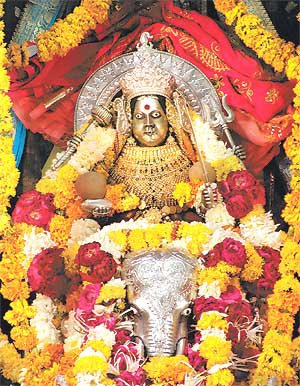 Bahucharaji was a daughter of a “Charan” Bapal dan Detha. She and her sister were on journey with a caravan when a marauder named Bapiya attacked their caravan. It was common practice in charan men and women if overpowered by their enemies, not to surrender but to kill themselves. Shedding the blood of charan was considered heinous sin. When Bapiya attacked the caravan, Bahuchara and her sisters announced tragu and cut their breasts. Legends tells that Bapiya was cursed and became impotent. The curse was lifted only when he worshiped Bahuchara Mata by dressing and acting like woman. Today Bahuchara mata is considered patroness of—and worshipped by—the hijra community in India. Her followers believe in non-violence and consider killing of all animals and creatures a sin.

Depiction and Symbols:
Bahuchara Mata is shown as a woman who carries a sword on her top right, a text of scriptures on her top left, the abhay hasta mudra (”showering of blessings”) on her bottom right, and a trident on her bottom left. She is seated on a rooster, which symbolises innocence.

The temple of Bahuchara Mata is located in Bechraji town in Mehsana district of Gujarat, India. It is 110 km from Ahmedabad and 35 km west of Mahesana. The original temple complex was built in year 1783 AD. The temple is nicely decorated with stone carving. Every year 1.5 million pilgrims visit this temple. Toda Mata (Bahuchara Mata) is located in Sankhalpur. The origin of Bahuchra Mata is situated at Varakhdiwala temple in Bechraji. Because Bhakta Vallabha Dhola wrote in his Aanand no Garbo the original place of Bahuchra Mata is situated at between Sankhalpur and Dedana village. The Toda Mata temple in Sankhalpur is 2 kilometers fare from Bechraji (Bahuchraji).he temple is beautifully decorated with ancient carvings and paintings on the wall. South and North gate are structured with carved and decorated zharukha. There is also havan mandap for yagna. Big meeting hall is also build by temple trust to organize meetings and other functions. Temple is structured using vastu shastra. Fairs are held here at every chaitra and ashadhi purnima, full moon day. On this day numbers of devotees visits the temple.