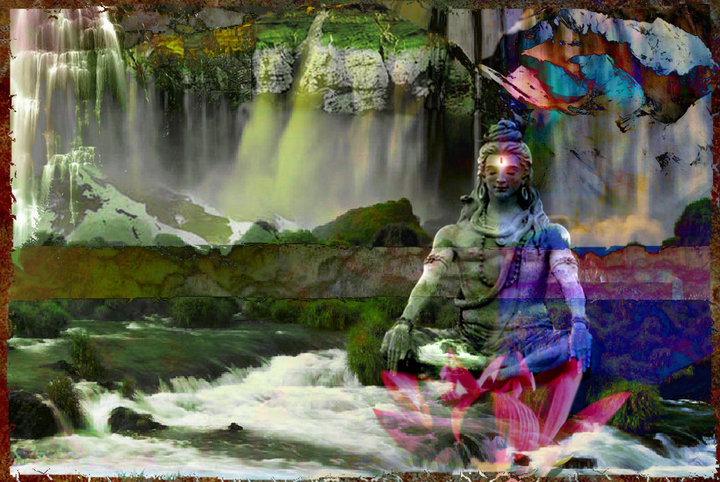 
They say a picture is worth a thousand words. This definitely holds true with the images of Hindu deities. Taking the image of Lord Shiva, this article investigates some aspects of Shiva’s image…the crescent moon near his head, the river Ganga flowing from his hair and the dark blue neck. What can we learn from such imagery?

When the ego is controlled and humility is present, the mind too will keep on growing - because it will be receptive to learn new things, and will inevitably gain in strength and knowledge. The crescent moon represents a state of mind where a person understands that "No matter how much I know, there is still more to learn and absorb. I should never think I know everything". A person who has this understanding will always grow in wisdom, like the crescent moon.

On the other hand a person who is arrogant, overly proud of their knowledge and feels like they have nothing else to learn will diminish, like the full moon. The ideal is to keep humble, and have the understanding that no matter how much we know, there is still more to learn. Keeping our mind in this state is essential for progress on the spiritual path.

In an ancient story from the Puranas, Shiva once drunk some deadly poison that was thrown up by the ocean. The Devas and Asuras were churning the ocean in quest of the nectar of immortality. The ocean threw up many objects before the nectar appeared, including some deadly poison. The poison was so toxic that it would have killed all the inhabitants of the earth. Shiva appeared at the scene, and drunk the poison, in order to protect the world's inhabitants. Shiva kept the poison at the level of his neck, because if he let it reach his stomach it would have been harmful. Therefore his neck is dark blue, which is the colour of the poison.

The poison represents all the negativity and evil in the world. In order to help the world progress, a spiritual person must engage with society and its problems. This includes being around society's negativity and evil tendencies, to prevent them from destroying society. The negativity and evil tendencies are symbolised by the poison. But it is important not to allow this poison to actually affect and harm us - this requires vigilance. It is easy to unknowingly take up negativity if we are surrounded by it, but through vigilance and care this can be avoided. This is the meaning of "keeping the poison at the neck", whereby it is kept at a level that we can manage without allowing it to poison us.

We can see a fountain of water flowing from Shiva's head. This is the River Ganga. According to a story from the Puranas, the Rishis had secured the descent of the Ganga from the Heavens to the Earth. However the force of the descent was so powerful that it would cause vast destruction upon impact with the land, unless there was some way of shielding it's blow and allowing it to flow gracefully. Shiva volunteered to take the blow of the Ganga onto his head, from which it flowed onto the Earth.

The Ganga symbolises spiritual wisdom. The highest spiritual secrets must be taken to the masses gradually and carefully, otherwise they can cause much confusion to the average man, who is still at an earlier stage of their personal development and will not understand them. They must be channelled through the mind of a wise and learned sage. When this is done, the wisdom becomes relevant, beautiful and of benefit to all.

There is a lot spoken against the worship of divine in form, which is often decried as "idol worship", by practitioners of certain religions. In the Hindu view, the Divine Being transcends all human conceptualisation, yet can be approached in many ways. Focusing on an image is much easier for the mind than trying to focus on abstract divinity. Both are valid ways to communicate with the Divine. Hinduism also has many formless methods of worship. However, for many people focusing on an image allows a more intense connection.

In addition, if we know the meanings in the images it helps even more. This is because the meanings and teachings we have learnt are reinforced into our subconscious minds whenever we focus on it, even if we are not actually consciously focusing on that particular meaning. This subconscious learning takes place all the time. For example, if somebody goes to America for a long time, there is a good chance that they'll pick up the accent. This is not because they've purposely set out to speak with an American accent, but something that gets subconsciously learnt. In fact, most of our behaviour is actually learnt and shaped subconsciously. That is why, focusing on the image of a Deity that we understand, is something that will influence us at a deep level. The idea of subconscious learning as a tool for development is a theme that is well developed in Hindu teachings. For example, Patanjali's Yoga Sutras state that the "Mind takes the shape of whatever it focuses it's attention upon