The Prophecies of Indonesia, by Akshay Suresh 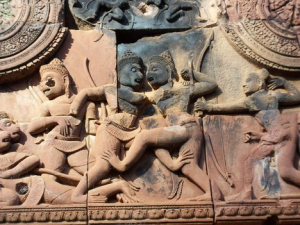 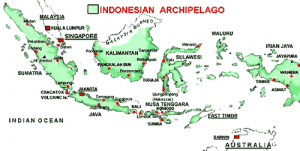 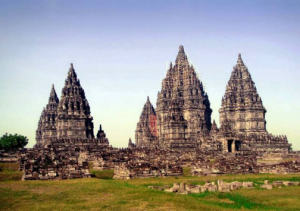 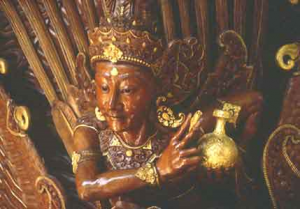 The Prophecies of Indonesia, by Akshay Suresh


Until the end of the 15th century, Hinduism was the predominant religion in the islands of Java and Sumatra. Hinduism is said to have spread to these islands as early as the first century AD. The Tarumanagara inscriptions of the 4th century AD are the earliest evidence of Hindu influence in Java. Hinduism flourished in these Indonesian islands until the arrival of Islam in the 14th century. Indonesia is today the most populous Muslim-majority nation, with 86.1% Muslims (2000 census) and 3% Hindus. However, there is a self-conscious Hindu revival movement emerging from the Javanese society with constant reference to the famous Javanese prophecies of Sabdapalon and Jayabhaya.

It is interesting to note that the ancient Indian Sanskrit epic, Ramayana, makes a mention of these islands. After the abduction of Sita from the Panchavati forest, Rama and Lakshmana go in search of her. They meet

The fight between Vali and Sugreeva

Hanuman and Sugreeva near the vicinity of the mountain Rishyamukha. Rama helps Sugreeva by killing his elder brother Vali and making him the king of Kishkinda. In return of Rama’s help, Sugreeva and the Vanaras agree to find Sita. Sugreeva orders Niila, his commander to assemble the troops. He orders Vinata, a mighty vanara warrior to search the Eastern side for Sita. While doing so he describes the islands of South East Asia.

In Kishkindha Kanda of Valmiki Ramayana, chapter 40 verses 30, 31 and 32, the islands of Java and Sumatra are said to have been described by Sugreeva:

“You strive hard in the island of Yava, which will be splendorous with seven kingdoms, like that even in Golden and Silver islands that are enwreathed with gold-mines, in and around Yava islands. On crossing over Yava Island, there is a mountain named Shishira, which touches heaven with its peak, and which gods and demons adore. You shall collectively rake through all the impassable mountains, waterfalls, and forests in these islands for the glorious wife of Rama.”

The islands of Yava mentioned in the above verses are said to be the modern day Java islands. The Golden and Silver islands refer to Sumatra which was earlier known as Swarnadwīpa (Island of Gold). The seven kingdoms may refer to the Indonesian archipelago. This clearly indicates the knowledge of geography of regions beyond the Bharata khand by the ancient Hindus. This also suggests that people of ancient Bharat have travelled to these lands and back.


Before the arrival of Hinduism in the early first century AD, the native people of Indonesian Archipelago are said to have been practicing an indigenous belief system common to Austronesian people. The indigenous spiritual concepts were fused with Hinduism which evolved into Javanese Hinduism. Many of the ancient Indonesian kingdoms followed Hinduism. The most famous are the Mataram, Kediri and Singhasari kingdoms. The archipelagic empire of Majapahit which ruled between 1293 and 1500 was the most powerful last major empire in Indonesian history.

King Brawijaya V of the Majapahit Empire is said to have converted to Islam in 1478 thus ending the Hindu empire. He is said to have been cursed by his priest Sabdapalon for converting to Islam. Sabdapalon promised to come back after 500 years, at the time of political corruption and natural disaster to bring back the Javanese Hinduism. The first modern Hindu temples are said to have been completed on these islands during 1978 (Pura Agung Blambangan temple). Mass conversions, back to Hinduism, have also said to have occurred in the region during this time and the eruption of Mt. Semeru, around this time, are taken as signs of the prophecy of Sabdapalon being completed.

Another prophecy, well-known throughout Java and Indonesia, is the Ramalan (or Jangka) Jayabaya. Ratu Joyaboyo (Jayabhaya) was the king of Widarba (a thousand cities) who is noted for the prophecy where he said “The Javanese would be ruled by whites for 3 centuries and by yellow dwarfs for the life span of a maize plant prior to the return of the Ratu Adil: whose name must contain at least one syllable of the Javanese Noto Negoro.” When Japan occupied Java and the surrounding islands during the Second World War in 1942, the Indonesians are said to have come out in the streets dancing, welcoming the Japanese as a sign of the Jayabhaya prophecy. Later, when Japan granted independence to Indonesia in 1945, most of the Javanese believed the Jayabhaya prophecy had been realized.

Many Javanese appear to have retained aspects of their indigenous and Hindu traditions through the centuries of Islamic influence, under the banner of ‘Javanist religion’ or a non-orthodox ‘Javanese Islam’. The emergence of a self-conscious Hindu revival movement these days within Javanese community is a sign of significant development. Hindu symbols are still in use in Indonesia. The state intelligence agency of Republic of Indonesia has a Garuda as their symbol and the official airline of Indonesia is called Garuda Indonesia.

Akshay Suresh is a graduate student at George Washington University, studying electrical engineering. His interests include reading articles on religions and cultures, and collecting stamps, coins and antiques.

MAY INDONESIA SHOW THE WAY TO THE WORLD FOR REVIVAL OF HINDUISM AND RETURN TO THE GLORIOUS MOTHER OF HINDU RELIGION.MAY THE PROPHESY OF THE RISHIS OF INDONESIA COME TRUE.FREEDOM OF HUMAN BEINGS FROM FANATIC MONOTHEISM (WHICH IS LEADING THE HUMAN RACE TO MUTUAL DESTRUCTION) CAN BE STOPPED ONLY BY POLYTHEISTIC AND BENAVOLENT HINDUISM.
ravi
January 18th, 2011 17:12 2

thanks for writing this piece, didn’t know that the ramayana referred to indonesia in its story. i saw a documentary on martial arts in thailand where hanuman is revered by muay thai kick boxers from bringing the art to them.
we’re seeing that hinduism is far reaching in asia.

Email ThisBlogThis!Share to TwitterShare to FacebookShare to Pinterest
Labels: by Akshay Suresh, The Prophecies of Indonesia