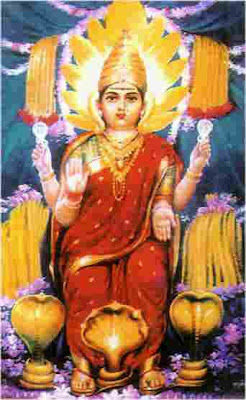 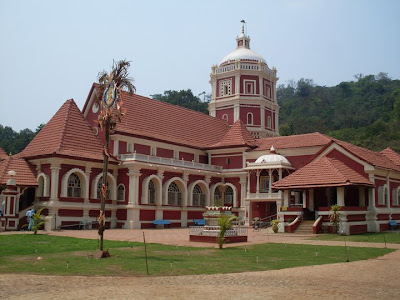 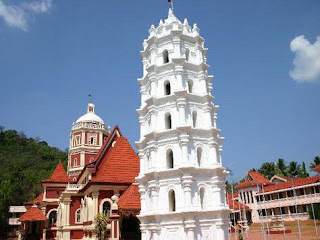 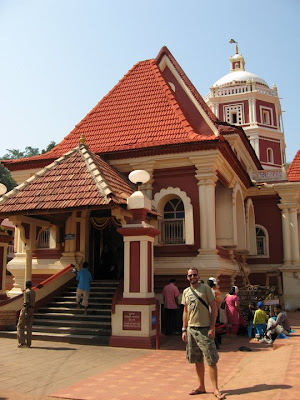 Location
Shri Devi Shantadurga temple is located at Kavlem in Ponda Taluka. This temple at kavlem is considered as one of the most important temple, and is the biggest temple in Goa. . The temple was constructed during the reign of Maratha ruler Shahu Raje of satara at the request of Naro Ram Mantri, one of his ministers in about 1738 A.D. There is a Shivalinga at this temple which is considered as belonging to the Mahajans of the surname 'Vorde' who are the Kulavis of the temple of Shri Manguesha.

Legend
The Shanta Durga or Shanteri Temple is at Kapilpura or Kavelem, in Atrunja taluka. This deity is believed to have been carried by Loma Sharma of Kaushik Gotra when the Saraswats came to Goa from Trihotrapuri (present-day Trihut division) in the Mithila region of Bihar. The legend goes that sometime later, the Destroyer and the Preserver had a mammoth fight at mount Gomanchala, during which Shiva used the Pashupati weapon, which could have proved detrimental to the entire universe. Lord Brahma, the creator, then prayed to the supreme Goddess Adishakti to intervene. She, in turn, sent Parvati in the form of Shanta Durga or Shanteri, Shantadurga stepped in as the arbitrator and succeeded in reconciling the warring parties, thus saving the universe from eternal doom. Hence she stands in the temple shrine in between Shiva and Vishnu (Preserver of the Universe) as a symbol of peace, who took Vishnu by her right and Shiva by her left hand and pacified the two. A story in the Skandapurana speaks of how Lord Shiva, when defeated by his spouse Parvati in a game of dice, had left mount Kailash and gone to Gomanchala near Kushasthali for tapasya (penance). It is here that he heard the cries of the Saraswat Brahmin, Loma Sharma, caught by a crocodile in the river Aghanashini. When Shiva saved Loma Sharma, he prayed to the Lord to remain in Kushasthali. Similarly, when Parvati arrived looking for Shiva, she was also requested to stay at the nearby village of Keloshi (Kadalivana Quelossim).

The deity Shanta Durga, therefore, is shown holding two serpents, one in each hand, representing Vishnu and Shiva. Shanteri is then said to have gone to Shankawali to kill the demons harassing the Brahmins there. It is for this good deed that she also earned the name of Vijaya. During the Portuguese inquisition, the trustees of the Shanta Durga temple decided to shift the idol to Atrunja taluka. The temple has an impressive idol of Goddess Durga in a tranquil mood, flanked by Vishnu and Shiva

Description of the Temple
Shri Shantadurga Temple's walls are one of the attractions to be seen, since it is an ancient temple. All the three directions i.e the north, south and the east walls were completed recently. The temple is well-equipped with Agrashalas and accommodated with modern amenities and many halls. In front of the 'Nayanmanohar Deepstambho' (the tall structures alcoves built in for placing oil lamps.) is a lake which fascinates many people. A distinctive six-storeyed deepstambha and ratha (chariot) with some gilt work adorn the temple grounds. At the entrance of the temple there is 'Nagarkhana' which is generally used for instrumental purpose (light music), which makes the atmosphere in the temple nostalgic. It is interesting to note that amongst some other features of the temple, the dome. The dome of the temple is one of it's kinds and is listed in one of the best among the other temples


The original temple was destroyed by the Portuguese in 1564 but the idol was taken away safely to Kavalem where mahars or harijans took care of it for a year. Subsequently, it was brought to its present abode. A special feature at this temple is that Harijans are permitted to enter the sanctum sanctorum of this temple. The temple consists of a collection of pyramidal roofs with the addition of a dome on the slope in the bosom of a chain of mountains. Both the pillars and floorings are made of Kashmir stone. A Panchadhatu (five element) image of Shanta Durga rests in the 'Girbhagraha' with a six inch black color Shivalinga adjacent to it.

Generally during the abhishek (the auspicious bath of Gods with honey, curds and milk) of Shri Shantadurga, the Shivling which is kept close to her also gets the honors. Basically the abhishek is done at the same time for both the Gods.
Posted by Free Thinker at 10:07 PM