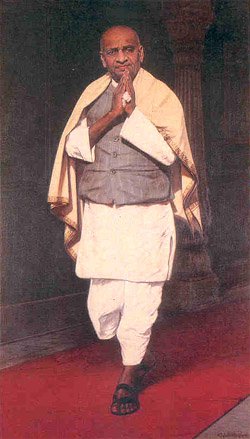 "1. It is the prime responsibility of every citizen to feel that his country
...is free and to defend its freedom is his duty. Every Indian should now
...forget that he is a Rajput, a Sikh or a Jat. He must remember that
...he is an Indian and he has every right in this country but with certain
...duties.

2. My only desire is that India should be a good producer and no one
...should be hungry, shedding tears for food in the country.

3. Even if we lose the wealth of thousands, and our life is sacrificed, we
...should keep smiling and be cheerful keeping our faith in God and Truth.

4. Manpower without Unity is not a strength unless it is harmonised and
...united properly, then it becomes a spiritual power.

5. There is something unique in this soil, which despite many obstacles
...has always remained the abode of great souls.

6. We should shoulder our responsibility by ourselves, and understand
...the people to takeover these responsibilities.We should not depend upon
...the Government by understanding the real situation. "

He was the true Father of the Nation who united India and didn't let it to split into Princley States. I wish he would have handles J&K like - Junagarh, Hyderabad and Mewar. Unfortunate that today Central govt and Media remembers only Gandhis but not great nationalists like him.


Vallabhbhai Patel (31 October 1875 – 15 December 1950) was a political and social leader of India who played a major role in the country's struggle for independence and guided its integration into a united, independent nation. He was called as "Iron Man Of India" In India and across the world.