Photograph of the Somanatha Temple at Somnath, Prabhas Patan, in Gujarat, the Garbhagriha taken by D.H. Sykes around 1869

Photograph of the Somanatha Temple at Somnath, Prabhas Patan, in Gujarat, the Garbhagriha taken by D.H. Sykes around 1869. 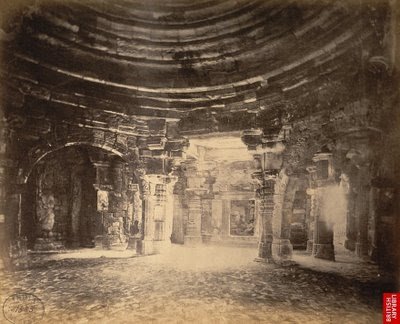 MORE THAN 50,000 MEN WOMAN AND CHILDREN WERE MURDERED IN LUST FOR WEALTH BY THIS ISLAMIC ZEALOT AND NOW HIS DECENDANTS STILL THREATEN US ... !!

TIME TO END THIS ATTACKS
~~~~~~~~~~~~~~~~~~~~
Lane Poole, author of Medieval India, has said that Mahommad of Ghazni, "who had vowed that every year should see him wage a holy war against the infidels of Hindustan" could not rest from his idol-breaking campaign so long as the temple of Somnath remained inviolate. It was for this specific purpose that he, at the very close of his career, undertook his arduous march across the desert from Multan to Anhilwada on the coast, fighting as he went, until he saw at last the famous temple. Mahmud Ghazni attacked this temple in 1026 A.D. and after a week-long resistance, captured it.

When the soldiers scaled the walls with ladders all they found inside were defenseless worshippers. Fifty thousand devotees praying to the linga and weeping passionately with hands clasped were massacred in cold blood. The Shiva Linga, adorned with gems and precious stones was broken and the temple burnt.

After the battle, Mahmud and his troops are described as having carried away across the desert the equivalent of 6.5 tons of gold. The fragments of the idol were carried off to grace the conquerors' palace and the temple gates were set up at Ghazni.

Mahmud was hailed throughout the Islamic world as a second Mohammed and his smashing of Somnath was lauded in the Sufi poetry of Attar, Sanai and Omar Khayyam. These poets equated Somnath with the temples to the pagan goddess

Al-Manat destroyed by Mohammed and viewed its destruction as the 'will of Allah' and the 'enlightened march of Islam.' The sack of Somnath made Mahmud of Ghazni a champion of the faith in the eyes of every Muslim.

Minhaj-as-Siraj tells us how Mahmud became widely known for having destroyed as many as thousand temples, and of his great feat in destroying the temple of Somnath and carrying off its idol, which he asserts was broken into four parts.

One part he deposited in the Jami Masjid of Ghazni, one he placed at the entrance of the royal palace, the third he sent to Mecca, and the fourth to Medina.
Posted by Free Thinker at 5:38 AM