Nalanda is one of the greatest universities in recorded history... 2,700-year-old city from 256 mounds that include 100 Buddhist viharas, four Jain viharas and 108 Shiva temples spread over 25 kms in size to accommodate over 1,50,000 people, with more than 10,000 students straight from 8th BC to 15th AD

Nalanda is one of the greatest universities in recorded history... 2,700-year-old city from 256 mounds that include 100 Buddhist viharas, four Jain viharas and 108 Shiva temples spread over 25 kms in size to accommodate over 1,50,000 people, with more than 10,000 students straight from 8th BC to 15th AD 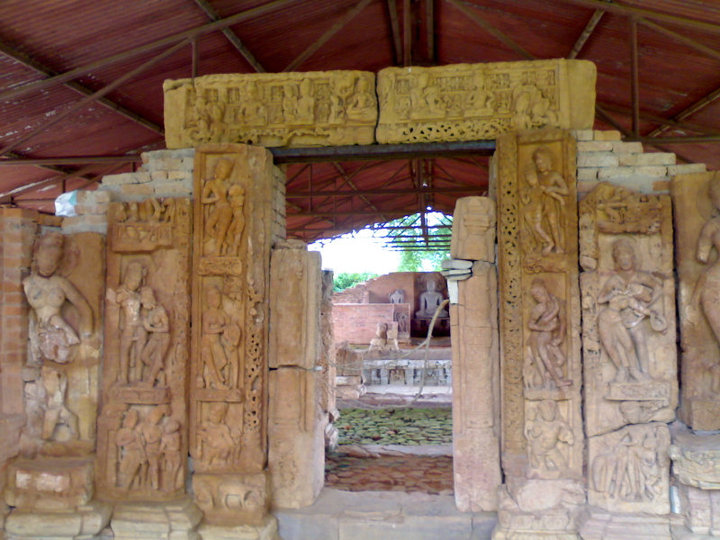 The Greatest Ancient University of India .. Mind blowing Indian Jewel of knowledge from A 2,700-year-old city from 256 mounds that include 100 Buddhist viharas, four Jain viharas and 108 Shiva templesspread over 25 kms in size and acknowled...ge to accomotae over 1,50,000 people , with more than 10,000 students straight from 8th BC to 15th AD .

Now the secularists will kill themselves knwowing Hind, Jain and Buddhists were more flourishing than they PROPOGATED !!!

Sirpur [ Shripur ] (Lal-2l ° 25'N, Long 82° II'E) in district Mahasamund of
Chattisgarh state, India, a small village on the right bank of Mahanadi was
once a large town of considerable importance. In 8th to 5 th centuries BC
Shripur was the capital of Sarabhapuriyas and Panduvamsis of South Kosla.
It's ancient name was 'Sripura'. As it contained a great number of dwelling
houses, for all classes, king's palace, numerous temples and was situated in a
forested country it was called 'pura', i.e.Sripura.

A 2,700-year-old city, complete with a palace, temples, houses and a
Buddhist educational centre big enough to accommodate 10,000 students.
This remarkable complex is slowly emerging out of the recesses of the earth
at Sirpur, 85 km from the capital Raipur. Archaeologists, historians and even
the Chhattisgarh government are excited by the find. For it promises to
reveal what may arguably be India's biggest ancient seat of learning—far
bigger than the world-famous Nalanda in Bihar—and one of its earliest temple
complexes with dimensions that may dwarf other similar structures in the
country.

From the 8rd century BC to the 15th to 17th century AD, Shripur was a
vibrant, meticulously planned settlement Urban development and city
planning which developed during Harappan Period, the example of which
are great cities like Mohenjodaro, Harappa, Lothal, Kalibangan,
Rupar, Dholavira, etc., survived during Early Historical period and later
on in Dakshin Kosala (Chhattisgarh), the outstanding examples of which
are Sirpur, Malhar, Ratanpur etc. Out of these, so far, only Shripur has
been excavated on a large scale, giving a glimpse of city planning and
architecture.

Shripur was one of Asia's top educational centres for Hinduism , Jainism and
mainly Buddhism's,. According to Chinese traveller Hiuen Tsang who visited
Shripur in the 7th century, it had an Ashoka stupa and at least 100 viharas and
150 temples. The excavations have found that most of the viharas were underground
and had brick walls. These included residential, meditation and study rooms.

Interestngly the principles of vaastu shastra seem to have been the touchstone for
builders in ancient Sirpur. There is not a single structure which is not in consonance
with vaastu. An interesting detail: pathways connecting the temples and residential
units with one another.

Earlier a Buddhist site majority , after the decline of Buddhism in india Sirpur
seems to have been taken over by the Shaivites subsequently , after the decline
of Buddhism . There is even a possibility that Buddhism and Hinduism
prospered simultaneously under a benevolent ruler here. To go back in history,
Sirpur was the capital of the ancient South Kosala kingdom between the
4th and 6th centuries AD. Spread over an area of 25 sq km, the Sirpur
archaeological complex is almost four times as big as Nalanda. Lengthwise,
the Sirpur site extends almost seven km. In comparison, Bodh
Gaya, also in Bihar, is less than three km long.

That Sirpur is an ancient Buddhist site was always known. The Chinese
traveller Hiuen Tsang, who visited Sirpur (then known as Shripur), wrote that it
was ruled by a king who was Kshatriya by birth but Buddhist by religion.
Hiuen Tsang talked of over 100 monasteries in Sirpur, inhabited by about
1,000 monks belonging to the Mahayana sect of Buddhism. Ancient Sirpur was
also at the junction of two important trade routes, to Janakpur and Ajanta in the
west and the Deccan kingdoms southwards.

Hemmed in by forests on three sides and located on the banks of the river
Mahanadi, the Sirpur site has already revealed 256 mounds that include 100
Buddhist viharas, four Jain viharas and 108 Shiva temples. An east-facing
palace, spread over an area of 60x40 metres, seems to be the site's
epicentre. It's a huge structure and to understand it properly, it needs
to be completely excavated. What is already known is that the palace
was at least three storeys and that teak was extensively used in the construction
.A unique finding: a ramp connecting the kitchen with the main hall in the palace.

Excavations in Sirpur, revealing the ruins of two large monasteries containing a colossal
image of Buddha in Bhumisparsha mudra (a cross-legged Buddha seated on the
ground) and three smaller monasteries. The ancient Sirpur was a city of almost 1.5 lakh
residents. The inhabitants were mainly agriculturists and there is evidence to
suggest that they used bullock carts with solid wheels. They do not seem to have
been aware of the existence of the horse. An interesting detail: pathways connecting
the temples and residential units with one another.

Of the 108 Shiva temples identified, two have been revealed in entirety. Both face
west. One of them is a pancharatna temple with beautiful carved designs on bricks
on the exterior of the garbh-griha (sanctum sanctorum). And it houses a one-metre tall,
fully intact Shivalinga. The most outstanding feature of this temple is the presence of
two huge stone slabs carved with Baiga figures. (Some 1,500 years later, Baiga
figures continue to be carved in the same fashion today by the Gond-Maria tribals
in Chhattisgarh). Some of the temples seem to have been constructed by the rulers
while others were built by the people themselves.

The work in Sirpur is far from complete. In fact, only a very small percentage of
the identified mounds have been exposed. Till date, of 200 Mounds only 20
mounds have been fully excavated, eight of them within the last one year. The
biggest and suppose to be the oldest higher education centre (of Ancient India)
of 4th century rises to meet the 21st century...

Archaeologists have discovered a statue of Buddhist female monk, Haritika living
in 6th century in Chhattisgarh state. Haritika used to kidnap children and kill them
and was converted by Buddha himself. Infact, finding the image of a female deity
only proves that they were also popular like male deities and gods in that time.

In this area a unique Buddha Vihar with nine room and eight ladders leading to these
rooms also was found by archaeologists. There is a 12 pillared columned hall in the
centre of the Buddha vihar. They also believe that there must have been a Buddha
Statue in the south of these rooms in the sanctorum.

A 1.8-metre Shivalinga, believed to be the tallest in the state, has been found during
the recent excavations. The Laxman temple in Sirpur is one of the finest brick temples
in the country. It`s construction style proves to be a turning point in the temple
architecture in the 7th century. Apart from the nine room unique area, one more Buddha
vihar with underground rooms and a six foot Buddha statue was also discovered here.

Mahasivagupta Balarjuna's Lakshman temple stone inscription says that his father
Harshagupta was married to Suryavarma's daughter Vasata. Suryavarma was the son of
shanvarma (551 A.D.) .Somavamshi king Nannadeva's son Teevardeva (grand son
of Indrabal) captured Dakshin Kosala after defeaing Sarbhapuriya king Mahapravar-raj
as at this time we get Teevardeva's inscription from Shripur and adjoining areas, in
which Teevardeva has been described as ruler of entire Kosala (middle of 6th century
A.D.). At this time Shripur was at its Golden Era and reached the peak of glory. It is
during this period that art, architecture, iconography and literature freely grew and
Sirpur's . fame spread to far off places. Probably it is due to this fame,

Chinese traveller Huen- T'sang visited Shripur in 639 A.D. He wrote that the inhabitants were tall, dark and prosperous. The king was Kshatriya and very benevolent. He discovered here as many as hundred Buddhist monasteries, inhabited by about- l0000 monks, belonging to the Mahayana sect, and more than 150 temples.

The Buddhist association of Sirpur, suspected as early" as 1881-82 by Cunnigham on
the basis of the find of colossal head of Buddha and partly confirmed by the discovery
of a complete inscribed image of Buddha in the first decade of the twentieth century
and latest discovery of bronze images was borne out by the 'unearthing of two
monasteries.

Surang Tila : While excavating a huge palace like complex was found in this area.
With it a big layer of charcoal was found and so the archaeologists think that this
place was burnt down or was an accident. Some of them think that Sirpur was
invaded because the trade was affected. Sirpur had been an important port for
the trade route. It was on the way from a big port of Varanasi to another big port in
Chhattisgarh. Since the traders had to pay more tax due to the smaller ports like
Sirpur on the way, they diverted their route and the trade collapsed in Sirpur.

In order to understand habitation patterns of the ancient site, two residences have
been exposed. Both belong to Shaivite priests and are located just south of the
temples. Both the houses are two-storied structures and have three rooms and
a verandah each. Both face the temple and have a room each on the first floor
that is without any entrance. These rooms, probably, served as a granary and
were accessed through a hole in the floor. The size of the granary is a fair measure
of the number of inhabitants of a house. Interestingly, grain is still stored in
Chhattisgarh in exactly the same manner. Iron locks and stone-grinders have
also been unearthed.

Anand Prabhu Kuti Vihar: Sirpur [ Shripur] is known for its Buddha Vihars. The most
famous is Anand Prabhu Kuti Vihar" constructed by Bhikshu Anand Prabhu, a follower
of Buddha, during the period of Mahashivgupt Balarjun. The Vihar had 14 rooms and
at the main entrance adored the Dwarapal carved in stone pillars on either side. A six
feet tall statue of Buddha touching the earth is installed inside the vihar. Another Buddhist
structure / Vihar recently excavated, situated near to the 'Anand Prabhu Kudi Vihar'
called 'Swastik Vihar'. This vihar is belived to be used for meditation and study purpose
by Buddh Bhikshus.
Posted by Free Thinker at 6:21 AM