Bhairava (Sanskrit: भैरव, "Terrible" or "Frightful", sometimes known as Bhairo or Bhairon or Bhairadya, is the fierce manifestation of Shiva associated with annihilation. 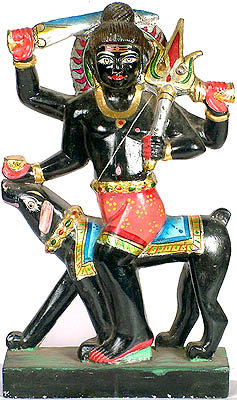 [2] He is one of the most important deities of Nepal, sacred to Hindus alike.He is depicted ornamented with a range of twisted serpents, which serve as earrings, bracelets, anklets, and sacred thread (yajnopavita). He wears a tiger skin and a ritual apron composed of human bones.
[3] Bhairava has a dog as his divine vahana (vehicle).Bhairava himself has eight manifestations: Kala Bhairava, Asitanga Bhairava, Samhara Bhairava, Ruru Bhairava, Krodha Bhairava, Kapala Bhairava, Rudra Bhirava and Unmatta Bhairava. Kala Bhairava is conceptualized as the Guru of the planetary deity Saturn. Bhairava is known as Vairavar in Tamil where he is often presented as a Grama Devata or folk deity who safeguards the devotee on all eight directions (ettu tikku). Known in Sinhalese as Bahirawa, he protects treasures.
Lord Bhairava is the main deity worshipped by the cannibalistic Aghora sect.Legends.
The origin of Bhairava can be traced to the conversation between Lord Brahma and Lord Vishnu recounted in "Shiv Maha-Purana" where Lord Vishnu asks Lord Brahma who is the supreme creator of the Universe. Arrogantly, Brahma tells Vishnu to worship him because he (Brahma) is the supreme creator. This angered Shiva who in reality is the creator of all. Shiva then incarnated in the form of Bhairava to punish Brahma. Bhairava beheaded one of Brahma's five heads and since then Brahma has only four heads. When depicted as Kala Bhairava, Bhairava is shown carrying the decapitated head of Brahma. Cutting off Brahma's fifth head made him guilty of having slain Brahma, and as a result, he was forced to carry around the head for years until he had been absolved of the sin.
Another story of the origin of Bhairava is the tale of Shakthi, wife of Shiva. Shakthi, the daughter of the king of gods, Daksha, had chosen to marry Shiva. Her father disapproved the alliance because he perceived Shiva as an ascetic associated with a frugal lifestyle, forest animals and ghosts. Eventually, Daksha held a yagna (a ritualistic sacrifice) and invited all the gods, but not Shakthi and Shiva. Shakthi came to the yagna alone, where Daksha publicly spoke in a belittling manner about Shiva. Shakthi could not bear to hear her husband insulted and offered herself to the sacrificial fire.When Shiva learned of this, he destroyed the yagna and killed Daksha by beheading him. Shiva carried Shakthi's corpse on his shoulders and ran uncontrollably all around the world for days. Since this would eventually destroy all creation, Vishnu used his Sudarshan Chakra (divine discus) to cut Shakthi's body into pieces, which then fell all around. These spots where Shakthi's body parts fell are now known as Shakthi Peethas.
In the form of the frightful Bhairava, Shiva is said to be guarding each of these Shaktipeeths. Each Shaktipeeth temple is accompanied by a temple dedicated to Bhairava.
Temples Kal Bhairava Temple, near Purana Qila, New Delhi. Said to be established by the Pandava brothers during the building of their capital Indraprastha. Purana Qila is sometimes said to be their castle and the temple is situated in its backyard.
Ashta Bhairava at Sri Kamanada Eswar temple, Aragalur, Tamil Nadu.
Bhairavar Temple, Vairavan Patti, Karaikudi, Tamil Nadu.
Bhairaveswarar Temple, Cholapuram, Kumbakonam, Tamil Nadu.
Kal Bhairav Temple at Ujjain, M.P.
Kalabhairaveshvara Temple at Adichunchanagiri, Karnataka
Kalabhairaveshvara Temple at Jogi Mutt, Kadri, Mangalore, Karnataka
Kalabhairav Temple at Adhiyaman Kottai, Dharampuri district, Tamil Nadu
Sri Kalabhairava Swamy Temple at Ramareddy, Nizamabad district, Andhra Pradesh
Bhairava Kona, Visakhapatnam, Andhra Pradesh.
Bhairava is an important deity of the Newars. All the traditional settlements of Newars have at least a temple of Bhairava.
Most of the temples of Bhairava in Nepal are maintained by Newar priests. There are several Bhairava temples in the Kathmandu valley. Some of them are: The Kala Bhairava temple in Hanuman Dhoka (Durbar Square) has a 12-foot (3.7 m) high stone image of Kala Bhairava sculpted in the 17th century CE. It was believed that people die if they speak false in front of this sculpture. So, this temple served as the supreme court of Nepal for a long time.[citation needed]
Akash Bhairava (Sava Bhakku Deva or Wanga Dya)
Swet Bhairava
Shanta Bhairava (Majipa Lakhey Dya)
Kirtimukha Bhairava
Unmukta Bhairava (inside the Pashupatinath Temple)
Bagh Bhairava temple of Kirtipur
Batuk Bhairava temple, Lagankhel
The Kaal Bhairav Nath Mandir temple is in "Varne Goan" - {Satara-Maharastra}.
"Kaal Bhairicha Navane Changbhale"
Posted by Free Thinker at 4:05 AM