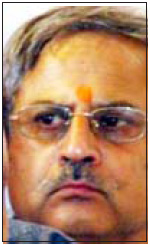 The multitude of Shivratri rituals having undated antiquity sculpt a riveting portrayal of indigenous and exogenous strains of our societal cum cultural growth. They represent a microcosm of diverse beliefs, varied faith patterns, variegated societal mores, multiple layers of distinct religious practices and variable traditions acquired over centuries in the bygone times. Speaking on a nostalgic note, Sh Chand Ji Bhat, an original resident of the village Ladhoo, tehsil Pampore, district Pulwama and presently putting up at ORT Complex Nagrota, Jammu, divulged that ahead of the festival, the whole house was spruced up by smearing it with a combined mix of clay, water and cowdung usually on Phagun Krishna Paksh Ashtami, the day set aside for it. To ensure the foolproof piousness and cleanliness, the clay to be used was procured from the adjacent almond orchard of the family. In conjuction with the family defined 'reeth', the ritualistic pooja of two flat bottomed and wide mouthed spherical earthenwares, locally called 'Anyut' was performed in the evening of Phagun Krishan Paksh Dwadeshi, also known as 'Vagur Bah'.

The said pooja was performed in the kitchen. The two earthenwares of 'Anyut' were seated on the backside space of the mud herth, called 'Dhaan'. They were seated on grass woven bases 'Aarie'. The pooja would take place in the evening after mouli and 'vusur' were tied around and 'sindoor' applied to them. In accordance with the family 'reeth' it was customary to put uncut red coloured raw turnips one each in the earthenwares of 'Anyut'. The cooked rice was also put in them. The said pooja was undertaken in the kitchen and not in the 'Vatuk Kuth' for the obvious reason as kitchen is not only an integral and bustling part of a Kashmiri household but also constitutes a sanctimonious area of the house after the pooja room or 'Thakur Kuth'. Chandji also divulged that 'vatuk comprised twenty two earthen utensils of one 'nout', one 'choud', one 'doul', three 'doulji', seven 'varie', two 'saniwarie', one 'sanipatul', one 'dhoopajoor' and two 'tokes'. On Shivratri, usually at dusk, only the pooja utensils of 'nout' and 'choud' were taken to the nearby spring called 'charish pokhar' by both male and female family members.

Before undertaking the said ritual of water filling, the ladies would attire themselves in new outfits and wear new 'Athoar' in the ears as a mark of auspiciousness and good omen. On their return, the entry inside the house was allowed only after observance of 'Aaluth' by waving around of a water filled vessel having a few rice grains inside it. The lavish spread of non-vegetarian gourmet goodies of 'Roganjosh', Kalyai, mixed dish of turnip and lambs stomach called 'Demni gogiz' minced meat preparation of 'mach', sour tasting 'chok charvun', the most favourite humble 'hakh' and raw chutney of raddish called 'muj chatin' were the sacrificial offerings to the designated vessel of 'Bhairav Doul' amidst elaborate pooja. As a part of the offering, apart from milk and sugar candy called 'kund', kishmish, almonds, dry dates sliced coconut pieces and a native herb of 'Bubrikath' were the ritualistic offerings to the pooja utensil of 'Nout', the symbolic representation of Lord Shiva. In accordance with the family custom, an oil lit clay lamp was kept burning continously right from Shivratri day upto the evening of 'Doon Mavus'.

The 'doon Mavus' pooja was performed at the village rivulet bank. Only 'Nout' and 'Choud' were taken there for replenshing them with fresh water during the 'Visarjan' ritual. Contrary to the more prevalent practice of ladies involvement elsewhere, the rite was performed solely by male members of the family. During the knock at the door ritual of 'Thuk Thuk', in addition to the usual 'ann, dhan, orzu, sokh sampdha, gurgupan was also symbolically wished and granted, undoubtedly affirming the pastoral disposition of the said family. On Tila Ashtami seven earthen diyas having a sprinkle of black sesame seeds were oil lit in the kitchen and seven rolled-up cooked rice morsels called a 'Hoon Machie' were placed on seven rice flour rotis called 'Chochivar'. Additionally a bronze 'Kahwa' tea utensil called as 'Khoas' was also filled up with cooked rice to facilitate the observance of ritual obeisance to the departed souls of the family. The rite was also supplemented with the filling up of an earthen soucer called 'Toke' with cooked rice, which was subsequently placed at the village rivulet ghat as a part of the said ritual.

Out of the seven oil lit lamps, one each of them was subsequently placed at the charcoal ash deposition, dry cowudung heap, exterior stepping stair stone base called 'Brandh', streamlet or spring bank and the village temple. Their placement in the rooms was avoided. However the family specific custom permitted only a previously used old oil lit clay lamp to be kept in the kitchen. The family also observed the rite of 'Jatoon Toon' by circular rotation of worn out wicker exteriors of 'Kangri' and old wicker baskets of 'Phout' and 'Kranjul'.

The Shivratri rituals are an amazing blend of multi splendoured traditions, myriad religious attitude, varied devotional pursuits and enormous reverence for the most favoured God and Ist Dev Lord Shiva, asserted Sh. Maharaja Krishan Handoo, a native of Achabal Adda, main town Anantnag and now putting up at Anand Nagar Bohri Jammu sharing the cherished memories of the festival of yester years, he disclosed that ahead of the festival, the house was readied for the most momentous occasion by smearing the entire house with a mixture of clay, water and cowdung. The clay required for it was specially collected from the sacred hillock shrine of the 'Tutlai Baal' of Nagbal Anantnag.

The 'livun hur' or the fabric used, for the cleanliness cum purifactory act of 'livun' had necessarily to be preserved in a contanier before it's subsequent immersion in the flowing waters of vitasta river. It was in accordane with the family belief to safeguard the wholesome sacredness of the purifactory act of 'livun'. Expanding his conversation, he also informed that 'Vatuk' consisted of thirteen items of a 'Gagar', number of 'Katories', two bronze tumblers, two Rattandeeps' in addition to a conch and a hand ringing bell or 'ghanta'. The pooja untensils were taken to the Nagbal for getting them filled up with water. The ladies of the household would drape themselves in new dress and wear 'athhoor' in the ears before undertaking the said ritual. It is akin to the must wear requirement of wedding finery during the auspicious and eventful occasions of weddings etc. A combination of seven different types of drug pulses namely mazie, mooong, maha masoor, rajmah, channa and peas mixed together was a family specific ritualistic offering to the 'Bhairav Doul'. The said offering was known by the local name of 'Sut Sous'.

In addition to it 'cooked rice along with a rice flour 'chochivor' was put in an earthen sacucer shaped 'Toke', which was seated on a grass woven base 'Aaer'. A few unwashed and uncooked meat pieces put into the 'Toke' amidst pooja was an extra sacrifical offering. An unusual and unique family 'reeth' also ordained that motifs of flowers and leaves were elegentaly carved out on the lime white washed side walls of the main door of the house on the Shivratri day. It is synonymous with the custom of the 'Krool Kharun' on the front door wall area of the house on the weddnig occasions. The said floral illustrations were also drawn on the lime water smeared back side wall of the 'Vatuk Kuth', which had an array of pooja utensils of 'Vatuk' installed in the front. It undeniably symbolises a feeling of heightened delight and cheer besides it being a recognisable sign of welcome on the aupsicious occasion of celestial weddnig of the Divine couple of Lord Shiva and Jagatmatta Goddess Parvati. It is in harmony with a sidespread belief that Godess Parvati is the divine daughter of the Satidesh Kashmir.

The above ritual bears a close resemblance with the reproduction of a specific carvings marked on the wall of the ceremonial room of the wedding function of 'Divgoan', which are knwon in Kashmiri as 'Divtimoen'. As per one more uncommon family reeth, it was requried to sanctify the 'Vatuk Kuth' before commencement of the Shivratri pooja by sprinkling water drops with a twig of an indigenous wild herb locally known as 'Bubrikath', which was dipped in a water container. The said ritual is also synonymous with a custom of same nature locally called 'Laev dieni' performed during the wedding functions and the other such events of auspicious nature. The utilised pooja material and restulting 'Nirmaal' was deposited after midnight usually at the base of a nearby tree, preferably a fruit bearing one during the custom of 'Purmujan' on Shivratri. An oil lit clay lamp was also required to burn uninterruptedly right from the Shivratri pooja upto the next day of 'Salam'. The final 'Visurjun' pooja of Doon Mavus was performed in the evening on the Vitasta ghat.

Interestingly on 'Doon Mavus' the used grass 'Arie', 'Vusir', Mouli, used flowers and the left over pooja material was wrapped up in dry grass, giving it a shape of spherical ball. It was subsequently floated in the Vitasta river after an oil lit clay lamp, and lighted 'dhoop' and incense sticks were placed on it. The knock at the door ritual of 'Thuk Thuk' was performed with a minor variation that all the good things of life were symbolically bestowed by the daughter-in-law instead usually done by elderly lady of the family. On Tila Ashtami, oil lit earthen lamps were placed at the four corner's of the house, the pathway lane leading to the house, the potable water source like a well or water tap the adjacent road intersection called 'chowk' and the 'Thokur Kuth'.

The placement of the oil lit lamps as such also display an unusual variance in the relation to the widespread practice prevalent in most of the households.

Source: Kashmir Sentinel
Posted by Free Thinker at 10:59 AM