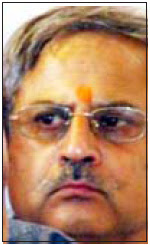 Festivals are vibrant representatives of traditional values, cultural and religious ethos and mythologised past. The various rituals and religious rites having localised distinctive uniqueness are vital components of festivals. They add substance, strength, warmth and spiritual colour to the weave of human life. The indigenous ritual variants of Kashmiri Maha Shivratri carry multilayered mystic truths and meanings. They not only denote ancient roots but also our cultural and religious moorings. The various Shivratri rituals having a time wrap of antiquity signify centuries old beliefs, traditions and wisdom. The festival is believed to symbolize the celestial wedding of Lord Shiva and Goddess Parvati and that of Goddess Sati in Her previous birth. As per a belief, the auspicious divine function was solemanised by the Lord Brahma Himself in present of all Deities, Rishis and Saints. Maha Shivratri is an eagerly awaited and enthusiastically looked forward festival as Lord Shiva, the great God of the Universe is the most favourite and lovable God, WHO is revered equally by all the Gods, human beings and the demons.

Lord Shiva represents a contrasting life of a householder and an ascetic.

Lord Shiva also connotes a happy and contented family life, Who is believed to reside in the snowcapped mountain of Kailash along with His ever auspicious spouse Goddess Parvati, sons Lord Ganesh, Lord Kartikey and a host of His faithful attendants like Nandi, Kubera, Yakshas, Gandharvas and other 'Ganas'. Rightly Kailash mountain is also known by an alternative name of 'Ganaparvata', the mountain of 'Ganas' as it is frequented by all the Deities, saints, sages, demi-Gods and the Divine incarnations. As per a popular lore, Lord Shiva also personifies the frightful and disturbing aspect of nature in the form of snow and harsh chilly winter. It is one of the reasons that Maha Shivratri is celebrated in the severe and rough winter. The festival celebrated in the night designated as 'Kalratri' also symbolises ignorance, obscurity, seclusion, tranquillity, quietness, impiety, depravity, incomprehension and degradable imperfections. Lord Shiva is the only Supreme God, who grants redemption from all these imperfections. The dark night of Maha Shivratri is also a metaphor for 'Tamogunic' aspect as Lord Shiva is believed to have revealed His divine appearance just before the Universe stepped into 'Kaliyuga', the fourth and last era of Hindu mythology.

Lord Shiva is also regarded as the foremost God of the whole Universe, which comprises earth, sky, air, fire, sun, moon and space. Lord Shiva is also known as the lord of music and dance, both of which are regarded as the divine arts. Lord Shiva is also the God of 'Prates', 'Pischas', Kirates, demons, goblins, ghosts, wandering spirits, the forest spirits of Yakshas' and the troublesome forces of the Universe. It is indicative of the benevolent nature of Lord Shiva, Who is believed to give refuge and shelter to all those, who feel rejected, disregarded, ignored and margianlised. The festival also signifies all that is sacred, pious and auspicious in this Universe. As such, as a run-up the preparations for the festival start nearly a month in advance as the whole house is spruced-up and readied for the welcome of the divine spouses and the divine guests. In tune with the aupiciousness of the Cosmic alliance, all the dress-up attires, utensils are washed and old earthen utensils are replaced by the new one's. The smearing of the house with a mix of mud, water and cowdung and use of earthenwares in the pooja are metaphors for the essential element of Earth, which speak volumes about earths generosity and benevolence.

The various Shivratri rituals, which are deeply embedded in our social life denote the celebration of mythologised heritage and indigenous individuality of our presence. The glory of these rituals is like a sweet memory for Sh. P.L. Razdan, an erstwhile resident of Purshiyar Srinagar and now stationed at Subash Nagar, Delhi. He recalled with pride that ritualistic 'Panch-ratri' pooja was an essential component of Shivratri festival in the earlier times. According to him, apart from the customary 'Vayur', two water-filled vessels known as 'Auster Kalash' and 'Mantar Kalash' were reverently seated on the left side corner of the Pooja-room. On the day prior to 'Haerath', in addition to 'Vagur' eleven number of earthenwares known by the name of 'Haerkai' occupied a reverential place in the Pooja-room, They were regarded as special invites for the sacred occasion. On the Shivratri day, in addition to 'Vatuk Bhairav', one more set of eleven earthenwares designated as 'Vatkai', six number of clay pots known as 'Khaterpals' and an additional set of eight more utensils collectively called as 'Asht Bhairav's' were an essential component of Pooja vessels. The eleven 'Vatkai' are said to represent the divine 'barat', while as the eight earthen utensils of 'Asht Bhairav', 'Symbolize the eight guarding deities of Srinagar city, who as per a religious belief are under the direct supervision of Lord Shiva. The 'Asht Bhairav' are also regarded as the body-guards of Lord Shiva. The notable exclusion of the usual wide-mouthed vessel 'Dul', representation of Goddess Parvati is peculiar to Shivratri pooja of his clan. An enormous quantity of flowers along with 'Arg' (a ritualistic mix of dry rice grains and flowers, was used in the 'Panchratri' pooja performed upto midnight for the first five day's of the festival. Speaking further, Sh. Razdan revealed that on 'Amavasya' locally known as 'Doon-maves', in addition to the family members, all the close relatives including married daughters and sons-in-law would join the ritualistic pooja, which would continue upto midnight. The 'doon-mavas' pooja was performed amidst the recitation of 'lila rabdha' stories and offering of Sugar Candy (Kund) offered to the vessel of 'Vatuk Bhairav' and waving of 'ratan-deep' brought individually by them. The said pooja would culminate with the mixing of water contained in 'Astur Kailash' and 'Mantar Kalashi' vessels with a connecting Kusha grass woven string remaining on both the vessels during the ritualistic mixing. The Kusha grass string was known by the name of 'Ginan Khadak'.

Afterwards, drops of mixed-upwater were sprinkled on the house inmates with the help of 'Ginan Khadak' amidst the recitation of 'Bahu Roop Garab' sholkas. As a final part of 'Amavasya' ritual, pooja was performed on the river bank of 'Vitasta' at midnight with rice flour made rotis locally known as 'Chochivar' and fried sheep liver pieces forming the main pooja ingredients.

The festival of Shivratri is like a walkdown on the memory lane for Sh. Bushan Lal Bhat, original resident of the village Chanderhama, district Baramulla and presently living at Paloura Jammu. Recapping the holy festival, he recollected that seven different items consisting of rice, haize, moong, barley, cooked rice and cotton seeds, locally called 'Kapsi tout' were put in a water filled earthen vessel called 'Satae Laej' on Shivratri day.

A few families of the village would also offer uncooked fish to the 'Bhairav Dul'. A small portion of snow usually procurred from the shady area of the village called 'Asthan' also formed an important offering. On 'Tila-Ashtami' evening, walnut shells filled with edible oil were utilized in place of oil lit earthen lamps. As per a local belief snow offering and oil lit walnut shulls give a touch of auspiciousness to the occasion.

The oil lit walnut shells were usually kept at the front door of the house, front varandah, courtyard wall, ash-storing container (Soore Laej) and cow-dung heap, locally known as 'gush loedoh'. Recollecting the festival celebration of the yore, Sh M.L. Kemu, an erstwhile resident of Zaindar Mohalla Srinagar and presently at Kunjwani Jammu opined that rituals lend a sense of belonging and an area specific identity to a community. He recollected that offering of a live fish locally known as 'neej gadh' to the designated vessel of 'Bhairav-Dul' was an integral part of Shivratri ritual. Reminiscing about the festival, Sh M.K. Khushoo, an original resident of Wazapora, Alikadal Srinagar recalled that a few families in his neighbourhood would offer a small part of sheep's hair coating locally known as 'moon' to 'Bhairav Dul'. In case of its' non-avalability, the said offering was substituted by unspure cotton. Recollecting further, he revealed that a small quantity of liquor was also a part of ritualistic offering to the vessel designated as 'Vatuk Nath'. A few drops of the liquor put on the palins and taken as 'naveed' by the house inmates was also an integral part of religious faith.

Memories of Shivratri celebration at Srinagar are like a sweet recollection for Sh. Papuji Khazanchi of Sathu Barbarshah Srinagar and now a resident of Bakshi Nagar Jammu. He recalled that sheeps' lungs alongwith heart put on an oval earthenware called 'toke' as a token of sacrificial offering during 'Shivratri Pooja' was led to the kites on the following day of 'Salam'. According to him, apart from the lavish delectable meat cuisines, the preparation of roasted minced meat was a special meat offering to the specific pooja vessel of ‘Bhairav Dul’ on Shivratri festival. Sh. Papuji Khazanchi also recounted that fragrant smell of incense resulting from the burning of gugal, locally known as 'Kanthgun' and black seasome seeds was ensured for the entire length of Shivratri Pooja as it's fragrance and aroma are believed not only to please Lord Shiva but also to ward off evil and negative influences. Sh H.L. Bhat, hailing from Sangam, Kokernag Anantnag and now resident of Durga Nagar, Jammu regards rituals as watchwords of a festival as they reinforce our implicit faith for the time-tested traditional customs.

Recounting the Shivratri Pooja of yesteryears he reminisced that about seven families of his village would make a sacrificial offering of coagulated blood of slaughtered sheep to the designated pooja vessel of 'Bhairav Dul'. It was procured either from the butcher or from the village abattoir (Zabahkhana). He also stated that a preparation of cooked lungs offered to 'Bhairav Dul' was also a part of tantric rituals.