Lakshman Temple, the first brick temple in the country, is located on the banks of the Mahanadi River, in Sirpur of Chhattisgarh. Dedicated to Lord Vishnu, it was built in the sixth century by Maharani Vasata

Lakshman Temple, the first brick temple in the country, is located on the banks of the Mahanadi River, in Sirpur of Chhattisgarh. Dedicated to Lord Vishnu, it was built in the sixth century by Maharani Vasata 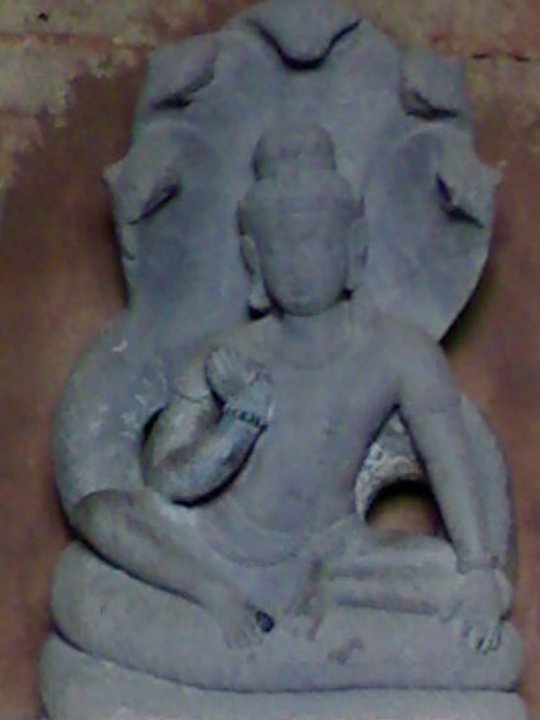 Hindu temples at the The Greatest Ancient University of India EVER .............. , WHERE Hindu, Jain , Buddhist lived in harmony spread over 25 kms in size.

Now the secularists will kill themselves knwowing Hind, Jain and Buddhists were more flourishing than they PROPOGATED !!!

See the wonder of India

Lakshman Temple, the first brick temple in the country, is located on the banks of the Mahanadi River, in Sirpur of Chhattisgarh. Dedicated to Lord Vishnu, it was built in the sixth century by Maharani Vasata - the widow queen of Harsha Gupta of Somvansh. The temple consists of a square sanctum roofed by a slightly curvilinear massive Shikhara.

A historic shrine, Lakshman Temple is a Panchrath type temple with Garbha Grih (main house), Mandaps, Antraal (passage) and exquisite carvings. An eye-catching feature is the entrance, noted for the statue of Sheshnaag serving as an umbrella to Lord Vishnu.

The images of several incarnations of Lord Vishnu have been exquisitely sculpted on the either side of the entrance, prominent being Vaishnava Dwarpal and the depiction of Krishna Leela in ornamental symbols.

A 1,500-year-old floor was unearthed during the renovation of the foundation of the shrine. A museum, established by the Archeological Survey of India, is within the
temple premises.
..................

Sirpur [ Shripur ] (Lal-2l ° 25'N, Long 82° II'E) in district Mahasamund of
Chattisgarh state, India, a small village on the right bank of Mahanadi was
once a large town of considerable importance. In 8th to 5 th centuries BC
Shripur was the capital of Sarabhapuriyas and Panduvamsis of South Kosla.
It's ancient name was 'Sripura'. As it contained a great number of dwelling
houses, for all classes, king's palace, numerous temples and was situated in a
forested country it was called 'pura', i.e.Sripura.

A 2,700-year-old city, complete with a palace, temples, houses and a
Buddhist educational centre big enough to accommodate 10,000 students.
This remarkable complex is slowly emerging out of the recesses of the earth
at Sirpur, 85 km from the capital Raipur. Archaeologists, historians and even
the Chhattisgarh government are excited by the find. For it promises to
reveal what may arguably be India's biggest ancient seat of learning—far
bigger than the world-famous Nalanda in Bihar—and one of its earliest temple
complexes with dimensions that may dwarf other similar structures in the
country.

From the 8rd century BC to the 15th to 17th century AD, Shripur was a
vibrant, meticulously planned settlement Urban development and city
planning which developed during Harappan Period, the example of which
are great cities like Mohenjodaro, Harappa, Lothal, Kalibangan,
Rupar, Dholavira, etc., survived during Early Historical period and later
on in Dakshin Kosala (Chhattisgarh), the outstanding examples of which
are Sirpur, Malhar, Ratanpur etc. Out of these, so far, only Shripur has
been excavated on a large scale, giving a glimpse of city planning and
architecture.

Shripur was one of Asia's top educational centres for Hinduism , Jainism and
mainly Buddhism's,. According to Chinese traveller Hiuen Tsang who visited
Shripur in the 7th century, it had an Ashoka stupa and at least 100 viharas and
150 temples. The excavations have found that most of the viharas were underground
and had brick walls. These included residential, meditation and study rooms.

Intrestngly the principles of vaastu shastra seem to have been the touchstone for
builders in ancient Sirpur. There is not a single structure which is not in consonance
with vaastu. An interesting detail: pathways connecting the temples and residential
units with one another.

Earlier a Buddhist site majority , after the decline of Buddhism in india Sirpur
seems to have been taken over by the Shaivites subsequently , after the decline
of Buddhism . There is even a possibility that Buddhism and Hinduism
prospered simultaneously under a benevolent ruler here. To go back in history,
Sirpur was the capital of the ancient South Kosala kingdom between the
4th and 6th centuries AD. Spread over an area of 25 sq km, the Sirpur
archaeological complex is almost four times as big as Nalanda. Lengthwise,
the Sirpur site extends almost seven km. In comparison, Bodh
Gaya, also in Bihar, is less than three km long.

That Sirpur is an ancient Buddhist site was always known. The Chinese
traveller Hiuen Tsang, who visited Sirpur (then known as Shripur), wrote that it
was ruled by a king who was Kshatriya by birth but Buddhist by religion.
Hiuen Tsang talked of over 100 monasteries in Sirpur, inhabited by about
1,000 monks belonging to the Mahayana sect of Buddhism. Ancient Sirpur was
also at the junction of two important trade routes, to Janakpur and Ajanta in the
west and the Deccan kingdoms southwards.

Hemmed in by forests on three sides and located on the banks of the river
Mahanadi, the Sirpur site has already revealed 256 mounds that include 100
Buddhist viharas, four Jain viharas and 108 Shiva temples.

Others show depictions from the Panchatantra tales.

The work in Sirpur is far from complete. In fact, only a very small percentage of
the identified mounds have been exposed. Till date, of 256 Mounds only 20
mounds have been fully excavated, eight of them within the last one year. The
biggest and suppose to be the oldest higher education centre (of Ancient India)
of 8TH Century rises to meet the 21st century...