The Historic Mandore.. about 8 from the city of Jodhpur is the Mother Home of Mandodari .. the wife of Ravana and when the sarasvati flowed it was a beautiful land with gardens and fields and trees ..

The Historic Mandore.. about 8 from the city of Jodhpur is the Mother Home of Mandodari .. the wife of Ravana and when the sarasvati flowed it was a beautiful land with gardens and fields and trees .. 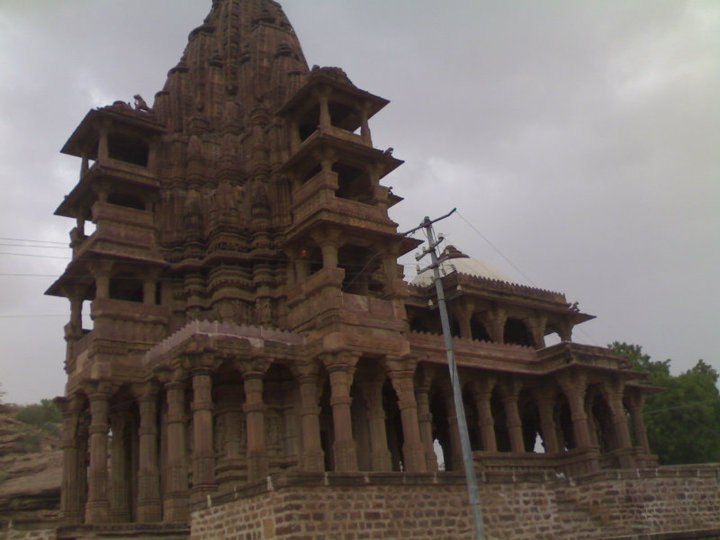 Mandore : about 8 from the city of Jodhpur .. MANDORE inhabited since the time of RAMAYANA, originally known as Mandavyapur. The king Ravana married to princess Mandodri of Mandavyapur. It is said it was the Mother Home of Mandodari .. the wife of Ravana and when the sarasvati flowed it was a beautiful land with gardens and fields and trees .... The earthquake of mid 18th century turned the flow of Sarasvati and it started flowing under the land ...

Mandore is an ancient town, and was the seat of the Mandorva branch of the Parihar (Pratihara) dynasty (They are called Gurjara-Pratiharas in one late inscription) which ruled the region in the 6th century AD by King Nahar Rao Parihar. In 1395 AD, a Mohil princess of the Parihar rulers of Mandore married Chundaji, scion of the Rathore clan of Rajputs. This was during the era of rapid ascendency of the Rathore clan, and Chundaji received Mandore in dowry. The town remained the seat of the Rathore clan until 1459 AD, when Rao Jodha, a Rathore chief who united the surrounding region under his rule, shifted his capital to the newly founded city of Jodhpur.

The historic town boasts several important monuments. The now ruined Mandore fort, with its thick walls and substantial size, was built in several stages and was once a fine piece of architecture. A huge, now ruined temple is a highlight of the fort. The outer wall of the temple depicts finely carved botanical designs, birds, animals and planets.
The Ek Thamba Mahal At Mandore Garden. Photo by Dr. Chetan S. Parihar, July 2005.

The 'Mandore gardens', with its charming collection of temples and memorials, and its high rock terraces, is another major attraction. The gardens house the Chhatris (cenotaphs) of many rulers of the erstwhile princely state of Marwar. Prominent among them is the chhatri of Maharaja Ajit Singh of Marwar, built in 1793.

The Mandore Gardens also house a government museum, a 'Hall of Heroes' and a temple to 33 crore Gods. Various artefacts and statues found in the area are housed at the museum. The 'Hall of Heroes' commemorates popular folk heroes of the region. It contains 16 figures carved out of a single rock. Next door is a larger hall called "The temple of 33 crore Gods" which houses images of varrious Hindu Gods.

Mandodari Being from Bharath was of such GOOD Character that Even Shri Rama advised Ravana to Seek her opinion; and Mandodari stood for Righteousness