PART 4- How Old is Indian History and Culture: (Absolute age of the earth planet and the sun, The revival procedure) by Bhuvan Singh

How Old is Indian History and Culture: PART 4 (Absolute age of the earth planet and the sun, The revival procedure)
by Bhuvan Singh 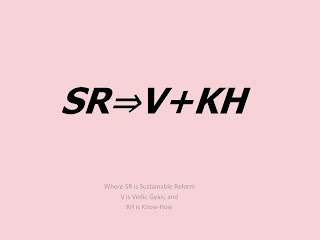 
Absolute age of the earth planet and the sun


Bhagwan Ved Vyas explains in the Bhagwatam that 155.52 trillion years have passed since Brahma originally created the planetary system, and this is the present age of Brahma.

The Bhagwatam says, “Brahma’s one day equals to 1,000 cycles of the four yugas (one cycle of four yugas is 4.2 million years). It is called one kalp. There are fourteen Manus in one kalp. For the same length of time there is the night of Brahma. This is called pralaya or kalp pralaya. At that time the earth planet and the sun along with three celestial abodes (bhu, bhuv and swah) enter into the transition period (and become inhabited). During that period Brahma holds within himself all the beings of the material and the celestial worlds in a suspended state and sleeps. (The next day he again produces them re-forms them as they were before) In the way Brahma lives for two parardh (twice of 50 years).

After that there is a complete dissolution of the brahmand (the planetary system and its celestial abodes). This is called prakrit pralaya of the brahmand”. (Bhagwatam 12/4/2 to 6)

“Half of Brahma’s life is called parardh. One parardh is finished and the existing kap is in the beginning of the second parardh (the first day of the 51st year of Brahma). The very first day of Brahma was the day when he himself was created by God Vishnu and it was called the Brahm Kalp. The present running kalp is called Varah kalp (or Shvet Varah Kalp).” (Bhagwatam 3/11/,34,36)

“In this kalp six Manus like Swayambhuv Manu etc. have elapsed. The seventh Manu is the son of Vivaswan. He is the present Manu and is called Vaivaswat Manu”. (Bhagwatam 8/1/4; 8/13/1)

In the Bhagwat Mahatmya Bhagwan Ved Vyas reveals a great secret and says that this is the 28th dwapar (of Vaivaswat manavantar). Not in all, but sometimes at the end of the 28th dwapar of a kalp the supreme personality of God, Krishna in His absolute loving form descends in the world of the land of Bharatvarsh and reveals His supremely charming playful Divine leelas; and that had happened in our age just about 5,000 years ago.

One year Brahma is of 360 days (and one month of Brahma is of 30 days). So, 360 X 50 = 18,000 days and nights of Brahma have elapsed. Thus, our earth planet and the sun have already been renovated 18,000 times. It’s a big figure, but reasonable if you think over it deeply and again it is given by an all-knowing divine personality.

Please circulate/share this article to the maximum number of people over the internet (blogs/forums/facebook, other social networking and otherwise as well). The aspiring leaders particularly the youth of India must know our value of real history and culture as VEDAS belongs to all. Understaniding the REAL KNOWLEDGE is the key to bring TRUE AND SUSTAINABLE REFORMS.

A super nova explodes and spreads its contents almost evenly in the space that contains all kinds of atoms from hydrogen to gold. Then only a small (earth) planet collects all the valuable heavy atoms and leaves the rest for the other planets. How? Scientists say just a coincidence. The Sun and Jupiter both collects gas and become gas planets at first stage. But the sun’s gravity accumulates a huge amount of gas from the same space and becomes bigger and bigger and finally becomes a star whereas in the same vicinity of space Jupiter remains much smaller. Are the hydrogen atoms scared to go down to Jupiter and have a preference to got to the Sun? Why is it so? Scientists say just a coincidences. All the theories of cosmology roll around coincidences and probabilities. An open minded scientist must have the courage to accept a reasonable explanation.

Universe was a programmed creation and not an accidental one. It had its aim and its functioning is always governed by God. It is already mentioned that the sun had been revived and its normal function was re-established 18,000 times up till now, and thus the current absolute life of our sun is 155.52 trillion years.

The Braham Vaivart Puran says that after fifteen years of Brahma’s life there is a greater pralaya, which means that since the creation of this brahmand ther have been three full transformations of the earth planet and the sun.


The pressure of the gravity at the center of the sun (which is an inward pressure) raises the temperature at the core of the sun and the thermonuclear fusion reaction (conversion of hydrogen into helium) continues, which generates an outward pressure. The equilibrium of both pressures maintain the stability of the sun. When the sun has exhausted most of the hydrogen supply in its core, there is no longer enough heat to support the core against gravity. The core of the star collapses under gravity’s pull until it reaches the required temperature which is needed for the thermonuclear fusion of the helium into carbon. The outward pressure increases which causes the expansion of the sun’s outer layer. The increased surface of the sun rapidly releases much more heat and dissipates a lot of the sun’s energy which reduces the temperature at its core. This situation slows down the thermonuclear reaction of the sun to a great limit and the sun shrinks to a much smaller size than its normal size because of reduced outward pressure. The thermonuclear reaction still barely continues, dissipating very little energy an giving off just enough heat to keep some of the tropical oceans of the earth planet unfrozen. After a fixed period, automatically the Divine energy triggers the revival procedure of the sun and a chain reaction starts that may cause the helium atoms to break up into form of hydrogen atom in the same step-wise reverse procedure as the hydrogen atoms were converted in to the helium atoms. It may be started by a strong positron beam hitting the nuclei of the helium atoms and causing the imbalance by converting the neutrons in to the protons. Also, during that pralaya period the gravitational force of the sun would have gradually collected some hydrogen gas from the space. The conversion of helium into hydrogen will gradually increase the thermonuclear reaction in the sun’s core which will also increase the outward pressure. It will cause the sun to grow in size until the equilibrium with inward pressure (gravity) is reached and the sun becomes a fully renewed star as it was before pralaya. It is wrong to think that the existing sun may go into a white dwarf state and another brand new sun to be created, because 4 billion years are not enough time for a new sun to be created; and the second thing is that in that case thousands of white dwarfs would have been hanging around our planter system which are not.

The Bhagwatam gives all the basic details of all the aspects of the creation in its third canto. In the Puranas there are a lot of descriptions about the holy places, the Himalayas, and the holy rivers of Bharatvarsh. The Bhagwatam briefly describes the total history of Bharatvarsh of 155.52 trillion years since Brahma produced hundreds of Sages on the earth planet in the pious atmosphere of the Ganges valley.

Please circulate/share this article to the maximum number of people over the internet (blogs/forums/facebook, other social networking and otherwise as well). The aspiring leaders particularly the youth of India must know our value of real history and culture as VEDAS belongs to all. This the key to bring TRUE AND SUSTAINABLE REFORMS.