KRISHNA ~ THE LEGEND WHO WAS PHYSICAL INCARNATION OF THE QUALITIES OF THE SUPREME SOUL LEFT THE WORLD WITH EVERYONE LONGING FOR HIM .... !!

KRISHNA ~ THE LEGEND WHO WAS PHYSICAL INCARNATION OF THE QUALITIES OF THE SUPREME SOUL LEFT THE WORLD WITH EVERYONE LONGING FOR HIM .... !! 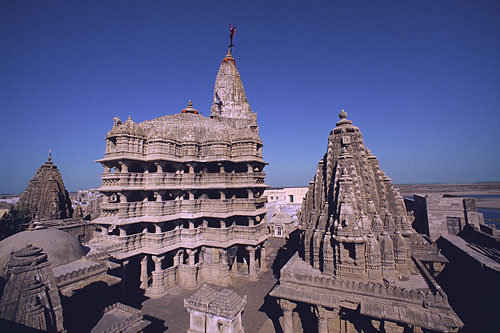 It is in existence since Vedic and Pouranic days with great mythological significance. It is held in high esteem as one of the seven most sacred places called as Sapta Puri in the Indian Sub-continent. The seven sacred places are Ayodhya, Mathura, Kasi, Kanchi, Avantika (Ujjain), Puri (Jagannathapuri), and Dwarka.

These seven places are said to be the most holy and religious places attached with great spiritual importance that leads one towards salvation. It is also called as one of the Char Dhams, the four abodes of God in four directions viz. Badari in the North, Rameswaram in the South, Puri Jagannath in the East and Dwarka in the West.

These are said to be the most revered sites for Hindus to be visited at least once in their life time.


Dwarka ........... is a city one iof the oldest in the world ... and a municipality of
Jamnagar district in the Gujarat state in India. Dwarka (Dvaraka in Sanskrit - used in this article when referring to the city in a historical context), also known as Dwarawati in Sanskrit literature is rated as one of the seven most ancient cities in the country. Dwarka is located at the geographical coordinates of 22°14'N 68°58'E? / ?22.23°N 68.97°E? / 22.23; 68.97. It is a relatively flat region at sea-level, having an average elevation of 0 metres (0 feet).

The legendary city of Dvaraka was the dwelling place of Lord Krishna. It is believed that due to damage and destruction by the sea, Dvaraka has submerged six times and modern day Dwarka is therefore the seventh such city to be built in the area.

The temple has five storey tower which was built by Sambha, who is the grandson of Lord Shri Krishna. The city was built by Vishwakarma in one day , by who is a celestial architect. The temple was made of limestone and sand. There is a flag hoisted in the temple tower everyday which waves in air beautifully welcoming the pilgrims. The structure of the temple is quite complicated . Even in Tsunami or Earthquake the temple was not destroyed. There are two gateways namely Swarga Dwar where pilgrims enter and Moksha Dwar where pilgrims exit. From the temple one can view the Sangamam of River Gomati flowing towards the sea.

There are shrines for Vasudeva, Devaki, Balarama and Temple of Patranis ~ The Queens of Shri Krishna the principals namely Revathy, Subhadra, Rukmini Devi, Jambavathi Devi and Sathybhama Devi. There is a special temple for Rukmini Devi on the way to Bet Dwaraka. Bet Dwaraka can be reached through boat. It is also the temple which is like Palace where Lord Shri Krishna had ruled. It is the same idol of Lord Dwarakanath kept in Bet Dwaraka. The temple looks like a Palace and has many Shrines for Lakshmi Narayana, Trivikrama, Jambavathi Devi, Sathybhama Devi and Rukmini Devi.

The city derives its name from word "Dwar" meaning door in Sanskrit. Dwarka is one of the holiest cities in Hinduism and one of the 4 main "dhams" along with Badrinath, Puri, Rameshwaram. The Jagatmandir temple which houses the Dwarkadhish, a form of Krishna.

Nageshwar Jyotirling, one of the 12 holy shrines of Lord Shiva, is located near Dwarka. Dwarka is also the site of Dwaraka Pitha (also known as Kalika Pitha), one of the four cardinal mathas established by Sri Adi Shankaracharya, the others being those at Sringeri, Puri and Jyotirmath. Adi Sankara had visited Dwarakdish Shrine and had established the Dwarka peeth. The Lord here is dressed in Kalyana Kolam where he appears to be a Royal Wedding costume. The place is so sacred as Lord Shri Krishna himself had resided and his successors had built the temple. It is one of the 108 Divya desam.

Dwarka is mentioned in the Mahabharata, the Harivansha, the Bhagavata Purana, the Skanda Purana, and the Vishnu Purana. It is said that this Dwarka was located near the site of the current city of Dwarka, but was eventually deserted and submerged into the sea.

Sri Krishna renounced war in Mathura for the greater good (and hence the name Ranchodrai) and founded (and settled in) Dvaraka. Sri Krishna killed Kansa (his maternal uncle) and made Ugrasen (his maternal grandfather) the king of Mathura. Enraged, the father-in-law of Kansa, Jarasandha (king of Magadha) with his friend Kalayavan attacked Mathura 17 times. For the safety of the people, Krishna and Yadavas decided to move the capital from Mathura to Dvaraka.

Submersion into the Sea

After Krishna left the earth for Vaikunta,about 36 years after the Mahabharat War (3138 BC), and the major Yadava leaders were killed in disputes among themselves, Arjuna went to Dwarka to bring Krishna's grandsons and the Yadava wives to Hastinapur, to safety. After Arjuna left Dwarka, it was submerged into the sea. Following is the account given by Arjuna, found in the

Mahabharata: ...imposed on it by nature. The sea rushed into the city. It coursed through the streets of the beautiful city. The sea covered up everything in the city. I saw the beautiful buildings becoming submerged one by one. In a matter of a few moments it was all over. The sea had now become as placid as a lake. There was no trace of the city. Dwaraka was just a name; just a memory.

The Vishnu Purana also mentions the submersion of Dwarka, stating : On the same day that Krishna departed from the earth the powerful dark-bodied Kali Age descended. The oceans rose and submerged the whole of Dwarka.


Wow..look at the splendour of this abode of Krishna!!
The poet Magha in his Sisupalavadha, sarga2, describes in slokas 31 onwards, the city of Dwaraka, sloka 33 can be translated:
"The yellow glitter of the golden fort of the city in the sea throwing yellow light all round looked as if the flames of vadavagni came out tearing asunder the sea."