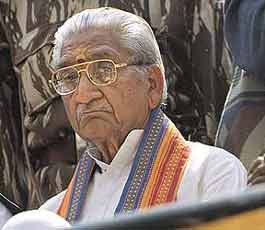 
VHP on Friday criticised Congress general secretary Digvijay Singh for his recent remarks on yoga guru Baba Ramdev asking him to come clean on the source of funding for his activities.


"The Congress party has never acknowledged the contributions of Hindu saints towards preserving the nation's moral fabric. Digvijay Singh's recent remarks against Baba Ramdev are yet another instance of showing disrespect to Hindu saints and their contributions," VHP international president Ashok Singhal told reporters.

He was reacting to Singh's recent comments where he had said that before launching any anti-corruption campaign, the Yoga guru must prove that he himself was not in possession of black money.

Accusing Ramdev of targeting the Congress, Singh said, "He (Ramdev) must understand that we are also as much against blackmoney as he claims to be. My only request to him is that he should be fair.

"He is targeting only one political party. But I have only one request from him that whenever he accepts money from his disciples, he should get a proof from donors that the funds received by him are not black money," Singh told reporters.

Reacting to the statement, Singhal said, "What moral right does Singh have to speak in this fashion when his own party is involved in 'high-profile scams' and when the government led by his party is unwilling to even disclose the names of those Indians who have stashed away huge amounts of unaccounted wealth in the Swiss bank.

Singh can not overcome the crisis of credibility his party is facing, with these diversionary tactics," he said.

He said, "Today Ramdev is being targeted. Tomorrow, it may be the turn of Sri Sri Ravishankar, the Brahmakumaris or any other spiritual leader or organization revered by the Hindus. Hindu Samaj will not take this lying down," the VHP supremo said.
Posted by Free Thinker at 6:17 AM