The Ramayana in Laos - By Kamala Ratnam

The Ramayana in Laos - By Kamala Ratnam
Ramayana (Phra Lak Phra Lam) in Laos: The stamp of The Royal Ballet. 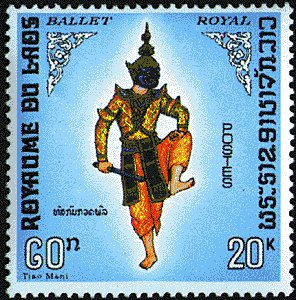 Universal to the literature and poetry of Laos, as well as to its dance, music, and sculpture, are oral myths and legends based on the Phra Lak Phra Lam, the Lao version of the Hindu epic, the Ramayana. This tale of Rama, a prince and the seventh incarnation of the Hindu god Vishnu, is known and loved throughout Southeast Asia. Other popular Lao literature includes the Jatakas, stories of previous incarnations of the Buddha. Both the Phra Lak Phra Lam and the Jataka tales contain moral metaphors enacted through rigorous battles in which good always triumphs over evil. Favorite stories tell how heroic princes defeat powerful demons.

Lao innovations include the tiered roof style that curves near to the ground, and a bronze roof ornament with five spires that symbolizes the Hindu Mount Meru.

The classical music and dance of Laos was inspired by the court dances of India, Cambodia, and Thailand. Its themes draw from Hindu mythology, the Buddhist Jataka tales, and local legends.

The proper names of the classical Valmiki Ramayana have undergone great change owing to the phonetic peculiarities of the Lava language. Thus,

There are 29 murals on the walls of the central hall of the Vat Oup Muong, describing the ‘Pha Lak Pha Lam’ (Beloved Lakshmana, Beloved Rama) story. Oup Muong means ‘underground hall’ or ‘tunnel.’