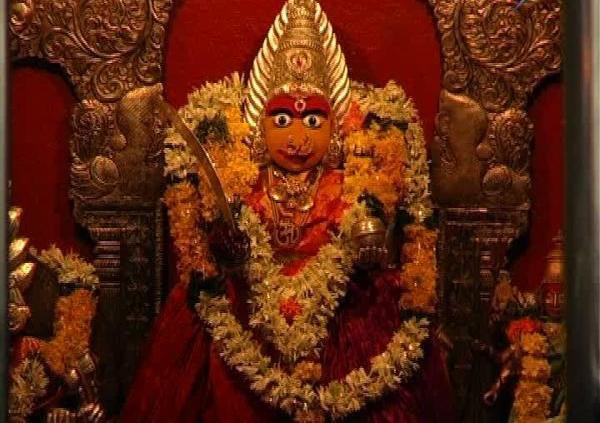 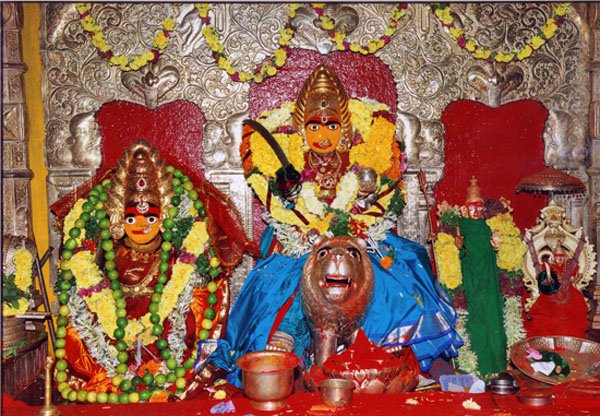 Ujjaini Mahankali Temple is a highly revered shrine located in Secunderabad, Andhra Pradesh. Built in 1815 by Sri Suriti Appayya, a resident of Secunderabad, the temple is dedicated to Goddess Kali. The original idol was a wooden statue later replaced with a marble statue and re-consecrated in 1964. The annual Bonalu Festival celebrated amidst much pomp and splendor is a major draw. This temple is very famous as Goddess Kanakadurga at Vijayawada , Goddess Bhadrakali at Warrangal etc. Itrs is visited and prayers offered to the Goddess by unending large number of devotees everyday. There is no doubt about granting the wishes of devotees by the Goddess and devotees fulfilling the vows.

Sri Suriti Appaiah was an army man who was in the year of 1813 A.D., along with other army personnel, sent to Ujjain as mason. As from childwood days he was very devotee of Ammavaaru (Goddess), he had the habit of visiting temple everyday and he used to visit Ujjaini Mahankali Temple regularly with utmost devotion during the entire period of his stay at Ujjain. And very soon Sri Appaiah became an ardent devotee of the powerful Goddess at Ujjain. On one day he has prostrated at her feet and offered prayers expressing gratitude for success of their mission to Ujjain and for showing the way for return journey, also prayed in many respects and expressed his wish that her idol will be installed at Secunderabad for offering prayers forever. All of them returned to Secunderabad from Ujjain after the Goddess felt happy and blessed Sri Appaiah for his selfless devotion. She also bestowed kindness on him.

In the month of July 1815, Sri Appaiah installed an idol made of wood at the place where the present temple is existing and conducting pujas. He built a small temple for the idol and named as Ujjain Mahankali. As SriRama temple at Bhadrachalam is symbol of devotion of devotee Sriramadasu of those days, this temple is also a symbol of devotion of Sri Suriti Appaiah resident of secmunderabad. Except this there is no other historical record about the existsence of this temple.

As the days passed the temple was developed bit by bit. One day while digging near the main temple as in the part of development of the temple, an idol of Goddess Manikyalamma was found. The same idol can be seen today in the sanctorum of the temple towards Ujjaini Mahankali’s right side. Since that day the devotees have been affering their prayers to Goddess Manikyalamma also and being grantted the wishes by the Goddess and devotees fulfilling the vows. In the year 1864 A.D Sri Appaiah replaced wooden idol with that of a statue of black stone and installed (pratishtapana) the two idols of Goddesses Mahankali and Mnikyalamma prana pratista was performed as per the Hindu sastras and relevant pujas. Later, Sri Sanjivaiah the son of Sri Appaiah collected some amounts in his village along with his friends and got constructed the mandapam in the year 1900 A.D.

In the year 1947 A.D the endowment department of the then state Government constituted a committee and arranged a Brahman, Sri Yendapalli Venkataramaiah for the purpose of conducting rituals to the Goddesses. In the year 1953 A.D endowment department of the then state Government arranged board of trustees though the first founder was Sri Appaiah and the family members of the army bearers also involved in the establishment of the Ujjaini Mahankali temple.
Posted by Free Thinker at 1:34 AM