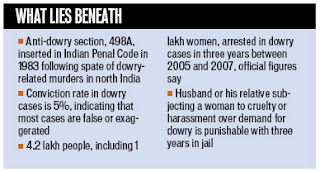 Following widespread complaints of the anti-dowry law being misused to lodge false cases, the government has decided to review the stringent provisions of the legislation. The Law Commission of India, which advises the government on legal issues, is considering grounds to

related stories
Demand for business is dowry: SC
Anti-dowry laws are being misused: HC
'Harassed' husbands protest 'misuse' of anti-dowry laws
Changes in the dowry law will shut out frivolous complaintstion 498A of the Indian
Penal Code, which deals with physical and mental cruelty by husbands and their relatives against wives over dowry.


Currently this section allows the police to arrest the accused named in a complaint without a warrant and even before investigation. Besides, there is no provision for a compromise between the two parties.

"We've referred the matter to the Law Commission for its opinion since a very large number of complaints have been received against this section," law minister M Veerappa Moily told HT.

He said the Supreme Court had last year asked the government twice to take a re-look at the 28-year-old anti-dowry law following a spurt in its misuse, resulting in old people, pregnant women and even children being booked on false complaints.

Independent studies have put the conviction rate in cases registered under this section at less than 5%, indicating that most of the cases are false.

The Law Commission is examining three aspects - whether it is feasible to categorise the offence as bailable, to allow the complainant to withdraw a complaint in case of a compromise with the court's permission, and if the police should retain the power to make arrests on their own.

"We are examining how to give a human touch to this section, which has a very high potential for misuse. Our concentration is to make the offence bailable, non-cognisable and compoundable," said commission member justice (retd) Shiv Kumar Sharma.

A compoundable offence permits withdrawal of a complaint if both sides patch up.

On August 13 last year, the Supreme Court had stated, "Such is the level of exaggeration of cruel behaviour on the part of husbands and their relatives that to find the truth is a Herculean task in a majority of these complaints."

The top court's observation had come in response to a petition filed by a resident of Surat, Preeti Gupta, who had been named in a dowry complaint by her sister-in-law Manisha Poddar in Jharkhand, after Poddar's marriage with Gupta's brother soured

It is heartening that the govt has taken note of the misuse of Dowry Law. Govt should also recognize that genuine cases of dowry harassment and dowry murder usually go unpunished. Actually, the situation is same with regard to ALL laws intended for protecting the so-called "weaker sections". Examples are R a p e Law, Domestic Violence law, and SC/ST "atrocities" law. Misuse of the last is especially frightening. At least in one case, a Court of Law has taken notice of the misuse of SC/ST act (reported in HT, "Court says ‘victims’", Saturday, 03 April 2010). The Judge in that case observed, "... even the educated class have started resorting to the misuse of the SC/ST Act merely to satisfy their personal ego."
I worked in an academic institution, and I have known very highly qualified persons — holding PhD degrees, no less — resorting to this devilry for various purposes: including harassment of their colleagues and bosses, getting promotions, making money through getting illicit "indents", demands for purchase or (fictional) "repair" of instruments, passing departmental examinations, and so on. In one case, the "victim" almost managed to get his prey arrested and put in police lock-up.