Ram was mentioned not only in Valmiki"s Ramayana, but also in Vyas"s Mahabharata at four places -- Ramopakhayan, Aaranyak Parva, Drona Parva and Dashrath Kathanak. In Rig Veda (10.60.4.4), there is a mention of Iksvaku, the ancestor of Ram and the founder of Ayodhya. The Atharva Veda mentions Ayodhya as having nine gates. The Atharva Veda (18.3.16) mentions the name of Vishwamitra, Vashista the preceptor of Ram, and Bhardwaj.

According to ancient Indian chronology and Puranic tradition Ram was born in the 24th Treta Yuga (Great Age). The Valmiki Ramayana (Bal Kanda 18.8.9) mentions at the time of Lord Ram"s birth as "the ninth lunar day of the bright fortnight of Chaitra, Punarvasu was in the ascendant and five planets (the Sun, Mars, Saturn, Jupiter and Venus) appeared in the zodiacal signs of Mesa or Aries, Makara or Capricorn, Tula or Libra, Karka or Cancer, and Mina or Pisces respectively. Jupiter in conjunction with the Moon appeared in Karka. From these, it is possible to calculate that Ram was born on January 10, 5114 BC, which means to say 7,122 years ago. 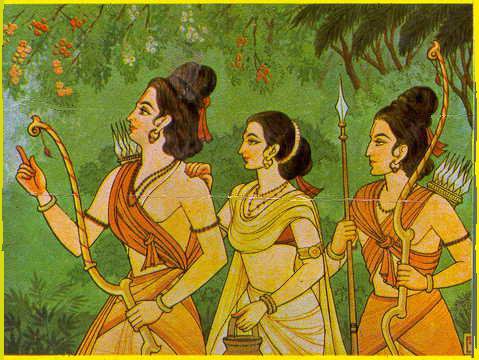 Shoumava A Sengupta Well again science or modern world needs concrete proof of his existence like some relics, remnants, a temple, a lost city etc. I think the Archeological Survey of India should take to more excavations in deeper parts of the soil to find some solid proof. I read somewhere that ASI digs only as much as 60 Metres and not more