The Ram Janmabhoomi Movement was not 'invented' by modern political organizations post-independence, but it was always sustained by the people of India.

Hindus had always been trying to regain the sacred site of Ram Janmabhoomi at Ayodhya. By 1912, they were in a very strong position. In reply Muslims slaughtered cow near the temple at Bakr-id. This sparked riots and troops had to be called in.

In 1934, riots once again broke out as Muslims tried cow sacrifice in nearby Shajahanpur. In retaliation, Hindu sadhus entered the Babri Masjid and pulled down the enclosure walls and gateways. The metal pinnacles on the domes were removed and one dome was substantially damaged.

In 1948, an inspector of Waqf reports that Hindus and Sikhs do not let Muslims offer any prayers or even let them enter. By 1948 Muslims had no control over the Babri Masjid and the mosque was non-functional.

In 1949, Hindus had been stacking bricks near the site, ready for a shock construction of temple whenever the opportunity arises.

On 23rd December 1949 Hindus enter the Masjid and place the icon of Sri Rama inside the Masjid. It was locked for public use of both Hindus and Muslims except on special occasions. The status quo remained until the demolition of the Babri Masjid on 6th December 1992.

Hindus never abandoned their claim on Ram Janmabhoomi and have always been willing to go to extreme lengths to rebuild a Grand Rama Temple at Ayodhya. 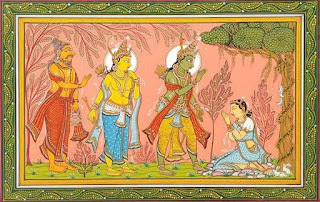