Maha Shivaratri means "The Great Night of Siva"- The Time for Nirvana and Karma Changing... 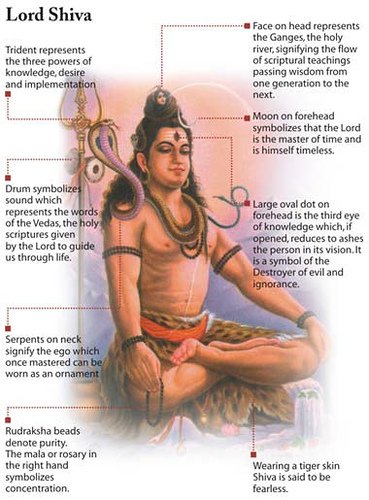 Wish you all a very happy blessed Maha Shivratri!

The 'Great Night of Shiva' or 'Maha Shivratri' occurs once a year on the eve of the New Moon, on the 14th day of the month of Magha, when the Sun is in the sign of Aquarius.

Maha Shivaratri means "The Great Night of Siva"- The Time for Nirvana and Karma Changing...

Maha Shivaratri means "The Great Night of Siva". The night of Shiva falls on the eve of the New Moon. The night is symbolic of a condition prior to creation and refers to the chaos that existed before light. But this chaotic darkness is not a negative condition. It is pure consciousness without the pollution of knowledge. In Buddha's terminology it is the Emptiness of Nirvana. Maha Shivaratri is the prime time for every soul to get into the primordial consciousness of non-existence or Nirvana.

One is required to keep vigil during the night in order to receive Shiva's grace.It is a great opportunity to connect with the divine formless form of Lord Shiva, the Lingam, who symbolizes 'all-auspiciousness', and to invite these energies in your life. In essence, Maha Shivaratri signifies the transition from the darkness of gloom and ignorance to the dawn of divine joy and knowledge.


Rdm Rao
Mahashivaratri Significance
Mahashivaratri is one of the important Hindu festivals celebrated with religious fervor across the length and breadth of India...


Mahashivaratri is one of the important Hindu festivals celebrated with religious fervor across the length and breadth of India. Followers of Lord Shiva consider the festival very special, as it is the time to show their love and devotion to their favorite deity. It is significant in every devotee's life, as it also tests ones ability to abstain from food (because fast is observed on the day) and remain vigil in the night without sleeping (because one has to remain awake all through the night, on Mahashivratri). In addition to this, Maha Shivaratri bears significance in Hindu mythology. In the following lines, learn all about the significance of Mahashivaratri.

According to the Hindu mythology, Lord Shiva declared that the rituals performed by his devotees on the 14th day of the dark fortnight in the month of Phalgun please him the most. Therefore, year by year, the day is observed as Mahashivratri, wherein devotees observe fast, sing songs and bhajans and offer prayers to the Almighty to seek his blessings. Pujas conducted in Lord Shiva temples during the day have significance too. This is because the rituals are conducted strictly in accordance with the method that is prescribed in Shiva Purana, a Hindu epic. According to the Purana, poojas are conducted once in every three hours, on Maha Shivaratri.

It is believed that the devotion of Lord Shiva on Mahashivaratri would freed the devotee from the past sins. Moreover, the devotee would reach the adobe of Lord Shiva and live there happily, because he/she is liberated from the cycle of birth and death, once he/she attains moksha or salvation. Therefore, all the devotees of Lord Shiva would flock the temples to offer their prayers. To serve the purpose, jujube fruits, stalks of Bilwa leaves, flowers and garlands are offered to the Shiva Linga by the devotees. If the devotee celebrates the festival at home, he/she would perform the Mahashivratri Puja by taking a holy bath (in warm water) early in the morning, wearing new clothes and then smearing bhasm (holy ash) on their forehead.

Maha Shivaratri is especially important for women. Ladies, both married and unmarried, would perform Shiva Puja and observe fast with great devotion and sincerity. This is predominantly done to appease Lord Shiva along with his consort Goddess Parvati, who is often called Ma Gauri. It is believed that Ma Gauri bestows marital bliss on unmarried women and blesses the married women with healthy and blissful married life. Since Lord Shiva is regarded as the ideal husband by the Hindu women, the unmarried women would not miss to observe the stringent fast on Shivaratri.


About Lord Shiva
Shiva (Sanskrit: Auspicious One) is one of the main deities of Hinduism that is worshipped as the paramount lord by the Shaivaite sects of India.

In Hinduism, Lord Shiva is regarded as the representation of the Supreme Being. He is known as the third element in the Hindu Trinity (Trimurti), the other two members being Lord Brahma - the creator and Lord Vishnu - the protector. Shiva is the destructive form of the Almighty. As the cycle of destruction and recreation is always in a circle, Shiva’s primary responsibility is maintaining the life cycle. Scholars say, as the Mahakaal, Shiva destroys and dissolves everything into nothingness but as Shankara, he also reproduces that which has been destroyed and dissolved. His symbol of Lingam or the phallus represents this reproductive power.

Lord Shiva is also considered to be the most unique of all Hindu gods and also the God of all. A great ascetic, Shiva is the only godhead who is forever in deep meditation, totally absorbed in contemplation in His abode, Kailaasa Mountain in the great Himalaya. Lord Shiva is also said to be inseparable from Shakti - Parvati the daughter of Himavaan - Haimavati. There is no Shiva without Shakti and no Shakti without Shiva, the two are one - or the absolute state of being.

Shiva is often shown with many faces, as creator, destroyer and preserver in total command of the cosmos. He contains both good and evil. He is moody, free of inhibitions, easy to please, protector of the down trodden, and has the power to alter the laws of destiny. Thus, it is Lord Shiva is known as the God of mercy and kindness. He protects his devotees from all evil that are always around us. He blesses his followers with grace, knowledge and peace.

Shiva as Ardhanareeswara
Lord Shiva is said to be half man and half woman. In the full figure of Siva the male and female principles are united. Shiva Linga - the symbol of Lord Shiva which consists of both Lingam (phallus) and yoni (the female organ) represent the totality of his nature and the totality of all created existence.

Appearance and Attributes of Lord Shiva
Lord Shiva is shown either in meditating or in the form of a Dancing God Nataraj where his dance is to the beat and rhythm of creation. He is also shown in sculptures with many hands. One pair of hands, for example, represents the balance between life and death. Shiva is 'tri netra' or three eyed, and is 'neela kantha' - blue-necked (having consumed poison to save the world from destruction). Besides, there are a lot many attributes associated with Lord Shiva. Here is a brief description of some of the important symbols that depict Lord Shiva. Each of his depiction signifies a different aspect of his Supreme Being.

Unclad body covered with ashes: This form of Lord Shiva depicts that Lord Shiva’s presence is much higher than this physical phenomenon. According to some scholars, Shiva’s body smeared with cemetery ash points to the philosophy of the life and death and the fact that death is the ultimate reality of the life.

Jata (Matted Hair): The flow of his matted hair represents Shiva as the Lord of Wind or Vayu, who is the subtle form of breath present in all living beings. Thus it is Shiva which is the lifeline for all living being. He is Pashupatinath.

Sacred Ganga: The holiest of the holy rivers, Ganga flows from the matted hair of Shiva. According to a legend, Shiva allowed an outlet to the great river to traverse the earth and bring purifying water to human being. Ganga also denotes fertility - one of the creative aspects of the Rudra.

The Third Eye: Lord Shiva is known as the three eyed Lord or Tryambaka Deva. The sun is his right eye, the moon left while the third eye of Shiva on his forehead is the eye of wisdom. It is the eye that looks beyond the obvious. The third eye can search evil from anywhere and destroys it completely.

Half-Open Eyes: The half-open eyes show that the universes cycle in process. When the eyes are completely closed it signifies the dissolvent of the universe and when it is completely open a new cycle of creation begins.

Crescent: Shiva bears on his head the crescent of the panchami (fifth day) moon. This is placed near the fiery third eye and this shows the power of Soma, the sacrificial offering, which is the representative of moon. It means that Shiva possesses the power of procreation along with the power of destruction. The moon is also a measure of time, thus Crescent also represent his control over time.

The Cobra Necklace: This suggests that Shiva is beyond the powers of death and is often the sole support in case of distress. He swallowed the poison kalketu for the wellbeing of the Universe. The deadly cobra represents that “death” aspect that Shiva has thoroughly conquered. The cobras around his neck also represent the dormant energy, called Kundalini, the serpent power. The snake curled three times around the neck of Lord Shiva depicts the past, present and future time. The snake looking in the right direction of Lord Shiva signifies that the Lord's perpetual laws of reason and justice preserve natural order in the universe.

The Vibhuti: Vibhuti is a three line of ashes drawn on the forehead that signifies the Immortality of the soul and manifested glory of the Lord.

Tiger Skin: Lord Shiva is shown sitting on or wearing a tiger skin. The tiger is the vehicle of Shakti, the Goddess of power and force. Shiva is beyond and above any kind of force. He is the master of Shakti. The tiger skin that he wears symbolizes victory over every force. Tiger also represent lust. Thus sitting on Tiger skin, Shiva indicates that he has conquered lust.

Rudraksha Necklace: ‘Rudra’ is the other name of Shiva. It also means strict or uncompromising and ‘aksha’ means eye. Rudraksha, the necklace worn by Lord Shiva shows that he is firm about his cosmic laws and to maintain law and order in the universe. The necklace has 108 beads, which symbolize the elements used in the creation of the world.

Damaru (Drum): A small drum with two sides alienated from each other by a thin neck-like structure represents the two utterly different states of existence, unclear and clear. When a damaru is shaken, the sound formed denotes Nada, the cosmic sound of AUM, which can be heard during deep meditation.

Trishul (Trident): A three-branched trident shown adjoining to Lord Shiva symbolizes His three fundamental powers will, action and knowledge. As a weapon the trident represents the instrument of punishment to the evil doer on all the three planes - spiritual, subtle and physical.

Nandi, the Bull: Nandi is said to be the vehicle of Lord Shiva. The bull represents both power and ignorance. Lord Shiva's use of the bull as his vehicle expresses the idea that He removes ignorance and bequeaths power of wisdom on His followers.

Email ThisBlogThis!Share to TwitterShare to FacebookShare to Pinterest
Labels: hindoo