The complex is supposed to be built by the Greatest of Hindu emperors there was MaharajaDhiraj Vikramaditya of Ujjaini , brother of Bharathiri the Kind and Philosopher and originator of Bharathari neeti shataka . The tower is known to have been errected to celebrate the victory of the Great Emperor Vikramaditya , over the lands now called as Arab lands . They have known to celebrate the coming of the vedic way of life .

Vedic culture was very much alive just before the birth of Muhammad. Again let's refer to the Sair-Ul-Okul. The following poem was written by Jirrham Bintoi who lived 165 years before the prophet Muhammed. It is in praise of India's great King Vikramaditya who had lived 500 years before Bintoi.

"Fortunate are those who were born during King Vikram's reign, he was a noble generous, dutiful ruler devoted to the welfare of his subjects. But at that time, We Arabs oblivious of divinity were lost in sensual pleasures. Plotting & torture were rampant. The darkness of ignorance had enveloped our country. Like the lamb struggling for its life in the cruel jaws of a wolf, we Arabs were gripped by ignorance. The whole country was enveloped in a darkness as intense as on a New moon night. But the present dawn & pleasant sunshine of education is the result of the favor of that noble king Vikram whose benevolence did not lose sight of us foreigners as we were. He spread his sacred culture amongst us and sent scholars from his own land whose brilliance shone like that of the sun in our country. These scholars & preceptors through whose benevolence we were once again made aware of the presence of god, introduced to his secret knowledge & put on the road to truth, had come to our country to initiate us in that culture & impart education." 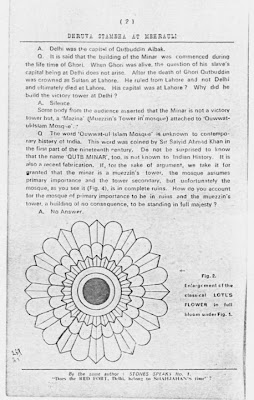 Thus we can see that Vedic religion and culture were present in Pre-Islamic Arabia as early as 1850 B.C., and definitely present at the time of Mohammed's birth.

According to history, the minar was started by Prithviraj or his uncle Vigraharaja who won Delhi from the Tomar Rajputs. However, it is assumed by secularist and anti hindu historians that Qutubuddib and Iltutmish finished it though the pictures will clearly show that the tower may have been commenced by Prithviraj or Vigraharaja.

Anang Pal,the Tomar Rajput King , established Delhi and Lal Kot,which is the area of Kutub Minar and extends up to Lal Quila ,or the demarcation line of old Delhi.In olden days fortresses used to be built at the entrance of a state and the present delineation of Delhi borders extended from South area of Qutub Minar to Red Quila in North Delhi.

The Tomars were descendents of the great Vikramaditya ,who had initially established the Iron Pillar at Vishnupadagiri (meaning “hill with footprint of Vishnu”). This place has been identified as modern Udayagiri, situated in the close vicinity of Besnagar, Vidisha and Sanchi. These towns are located about 50 kilometres east of Bhopal, in central India. There are several aspects to the original erection site of the pillar at Udayagiri. It must be worth noting that Vishnupadagiri is located on the Tropic of Cancer and, therefore, was a centre of astronomical studies during the Gupta period. 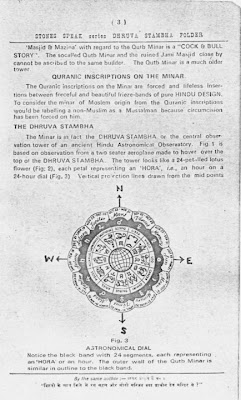 The Iron Pillar served an important astronomical function, when it was originally at Vishnupadagiri. The early morning shadow of the Iron Pillar fell in the direction of the foot of Anantasayain Vishnu (in one of the panels at Udayagiri) only in the time around summer solstice (June 21). The creation and development of the Udayagiri site appears to have been clearly guided by a highly developed astronomical knowledge. Therefore, the Udayagiri site, in general, and the Iron Pillar location in particular, provide firm evidence for the astronomical knowledge that existed in ancient India around 400 AD..The pillar was then believed to have been moved to Mathura.

Dhillika is the old name of India's capital, New Delhi. The name Delhi is derived from the word 'Dhillika'. Raja Dhilu (King Dihlu) founded ancient Delhi in 800 BC.It was the name of the first medieval township of Delhi, located on the southwestern border of the present Delhi, in Mehrauli. This was the first in the series of seven medieval cities. It is also known as Yoginipura, that is, the fortress of the yoginis (female divinities). A temple still exists at the entrance of Mehrauli called YOG MAYA TEMPLE. Mehrauli comes from Sanskrit word Mihira-awali. It signifies the town- ship where the well known astronomer Mihira of Vikramaditya's court lived along with his helpers, mathemati-cians and technicians.Delhi however gained in magnificence / importance during the time of Ananga Pala Tomara,in the 11th century. In the 12th century, the city was included in the dominions of Prithviraj Chauhan.

The Iron Pillar ,a symbol of Truth and Nemesis-God Shani of Hindu Religion was brought by Anang Pal of Tomar dynasty to Delhi to establish rule of Clean,truthful and honest governance,from Mathura a land of Krishna devotion.The idea behind it was to establish an orientation to the great epic Mahabharata which is connected to the history of Delhi as well as the significance of Gita,and Yudhishtra’s ascent to heaven in bodily form; from Swargya Rohini..The Hindu rulers built temples and used psychological epigraphs and monuments to instill religion in the local populace ,as they followed the pattern of the common man’s rule,or democratic ,socialist way of functioning as Krishnaji of the Yadav Clan.In China too the common man reigned supreme by the rule of Confucianism laying significance on ritualistic worship.The idea was not to punish after a crime was committed but to deter crime in man. 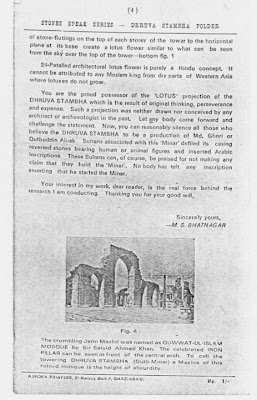 The Iron pillar bears an inscription in Sanskrit which states that it was erected as a standard in honour of the Hindu god, Vishnu. It also praises the valor and qualities of a king referred to simply as Chandra, who has been identified with the Gupta King Chandragupta II Vikramaditya (375-413). The inscription reads:

“ He, on whose arm fame was inscribed by the sword, when, in battle in the Vanga countries, he kneaded (and turned) back with (his) breast the enemies who, uniting together, came against (him);-he, by whom, having crossed in warfare the seven mouths of the (river) Sindhu, the Vâhlikas were conquered;-he, by the breezes of whose prowess the southern ocean is even still perfumed;-

(Line 3.)-He, the remnant of the great zeal of whose energy, which utterly destroyed (his) enemies, like (the remnant of the great glowing heat) of a burned-out fire in a great forest, even now leaves not the earth; though he, the king, as if wearied, has quitted this earth, and has gone to the other world, moving in (bodily) form to the land (of paradise) won by (the merit of his) actions, (but) remaining on (this) earth by (the memory of his) fame;-

(L. 5.)-By him, the king,-who attained sole supreme sovereignty in the world, acquired by his own arm and (enjoyed) for a very long time; (and) who, having the name of Chandra, carried a beauty of countenance like (the beauty of) the full-moon,-having in faith fixed his mind upon (the god) Vishnu, this lofty standard of the divine Vishnu was set up on the hill (called) Vishnupada. 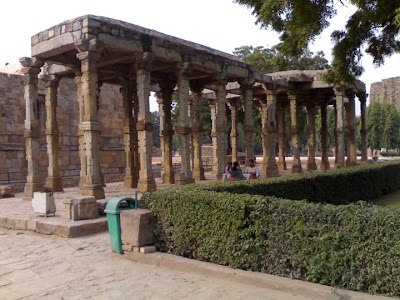 The reference was also to the Satvikka Purana [Smirti Texts of Hinduism]called Garuda Purana which is recited as a cremation ritual.The Garuda atop the pillar ,which was removed by muslims,bore testimony to what was inscribed and its relevance to the installation of the pillar.The pillar was used to signify the death principle of Hindus,the need for attaining Mokhsha and the path of Dharma. The iron pillar was the Garud Dhwaj alias Garud Stambh, i.e, the sentinel post of the Vishnu temple. The Sanskrit inscription in Brahmi script on the non-rusting iron pillar proclaimed the lofty standards of Vishnu on Vishnupad Giri. Here in the said precincts ,the description indicates that a statue of the rec- lining Vishnu ;initiating the creation was consecrated in the central shrine there which was ravaged by Mohammad Ghori and his henchman Qutubuddin.

Truth revealed from sky . People usually see this tower from ground. Prof Bhatnagar hired a helicopter and took a photo from the sky. That is when he realised that is a blooming lotus flower. 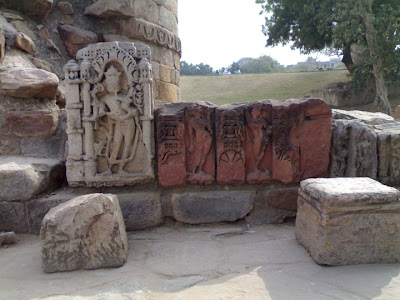 Sectarianism, bigotry, and its horrible descendant, fanaticism, have long possessed this beautiful earth. They have filled the earth with violence, drenched it often and often with human blood, destroyed civilisation and sent whole nations to despair. Had it not been for these horrible demons, human society would be far more advanced than it is now. But their time is come; and I fervently hope that the bell that tolled this morning in honour of this convention may be the death-knell of all fanaticism, of all persecutions with the sword or with the pen, and of all uncharitable feelings between persons wending their way to the same goal.
Excerpts from Swami Vivekananda’s Chicago speech on September 11, 1893 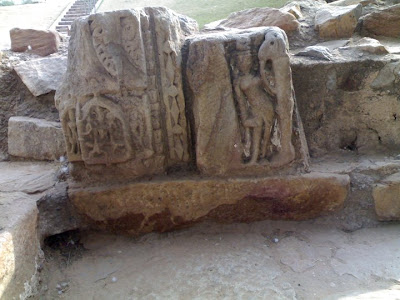 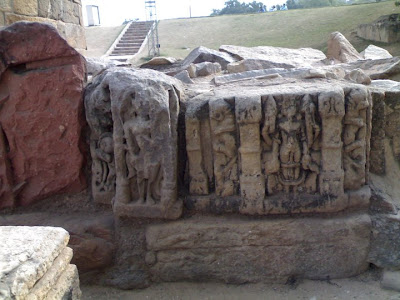