There was a reign of terror unleashed by Mughal emperor Aurangzeb against Hindus and Sikhs. They were either asked to convert to ISLAM or get killed brutually.


The ninth guru fo the Sikhs, Tegh Bahadur (1621-75) (like many of his followers) refused Mughal emperor Aurangzeb's order to convert to Islam and was brought to Delhi and beheaded on a site that later became an important gurdwara (abode of the guru, a Sikh temple) at Chandni Chowk, one of the old city's main thoroughfares. 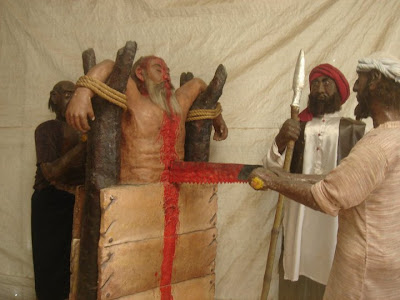 These events led the tenth guru, Gobind Singh (1666-1708), to transform the Sikhs into a militant brotherhood dedicated to defense of their faith at all times.


He instituted a baptism ceremony involving the immersion of a sword in sugared water that initiates Sikhs into the Khalsa (khalsa , from the Persian term for "the king's own," often taken to mean army of the pure) of dedicated devotion. Nihangs (warrior saints) belong to the same order that Guru Gobind Singh founded.
Posted by Free Thinker at 7:30 AM