Are Jews Shivaites ? is YHWH (Jewish blue coloured God) a way of pronouncing Shiva?
by Deep Bhakta
on Monday, September 13, 2010 at 7:50pm
courtesy: http://www.facebook.com/notes/deep-om-bhakta/are-jews-shivaites-is-yhwhjewish-blue-coloured-god-a-way-of-pronouncing-shiva/140961185946783
The Blue God of Judaism?﻿
Yes, the blue god of Judaism. The god that Jews worship is as blue as the Hindu god Shiva, the supreme being in Shaivism, the oldest sect within Hinduism. In some ways, the ancient Hebrews were more similar to modern-day Hindus than Jews. They acknowledged the existence of deities other than YHWH (whom Christians generally refer to as Yahweh) and, like their neighbors, looked to a pantheon of gods and goddesses to satisfy their individual and collective needs.1 Their principal deity, however, became and remained YHWH, whom they imagined as having anthropomorphic form.2 This article aims to contribute to and further recent discussion of YHWH’s masculine form,3 i.e., the Lord’s body. Hopefully, in so doing, long-overlooked similarities between YHWH and Shiva will receive due attention, and the feminine form of YHWH4 will re-emerge more fully, thereby triggering a re-appreciation for the life-creating and life-sustaining oneness of the divine masculine and the divine feminine, perhaps the most ancient tenet of Judaism. It is the color of the Lord’s body that interests us here. Examination of biblical, talmudic, midrashic, and mystical texts reveals that the Lord’s body is blue! The Hebrew terms tarshish, sapir, and tekhelet that convey the blueness of YHWH’s masculine form, accoutrements, and abode come from Sanskrit, not surprisingly, which, by itself, invites greater exploration and comparison of the similarities between Judaism and Hinduism, particularly Shaivism.5
The Book of Daniel 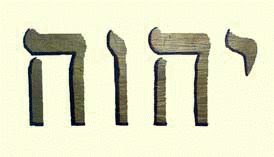 
Joined by Brahma, Vishnu sped toward the indescribable flaming light, which grew before their eyes into infinity, rending heaven and earth. Overwhelmed and terrified by their unfathomable vision, the two gods sought the beginning and end of its burning immensity. Brahma, flying upward with the wings of his bird shape—the wild gander—could not see its top, nor could Vishnu, diving down for a thousand years in his shape of a boar, see the bottom of that fire linga of him who is the light and destruction of the universe.


Both of the bewildered gods returned exhausted to the level they had started from, and within the flaming linga they beheld Shiva in golden glory. He illumined the dark flood, and the two gods, Vishnu and Brahma, bowed before him. Thunderous laughter, or the sound AUM, issued from the pillar, filled the sky, and Shiva dispelled their fear (VaP.55.13-57).43
In sum, YHWH of Judaism and Shiva of Hinduism, two blue-complexioned deities, manifest themselves as pillars of fire and then speak from inside the pillars, filling those present with terror. Similarities such as these will hopefully encourage exploration of others as well as foster dialogue between Jews and Hindus, adherents of two of the world’s most ancient and wisdom-filled spiritual traditions, which may, in fact, be closer to one another than previously imagined.
Posted by Free Thinker at 5:25 AM